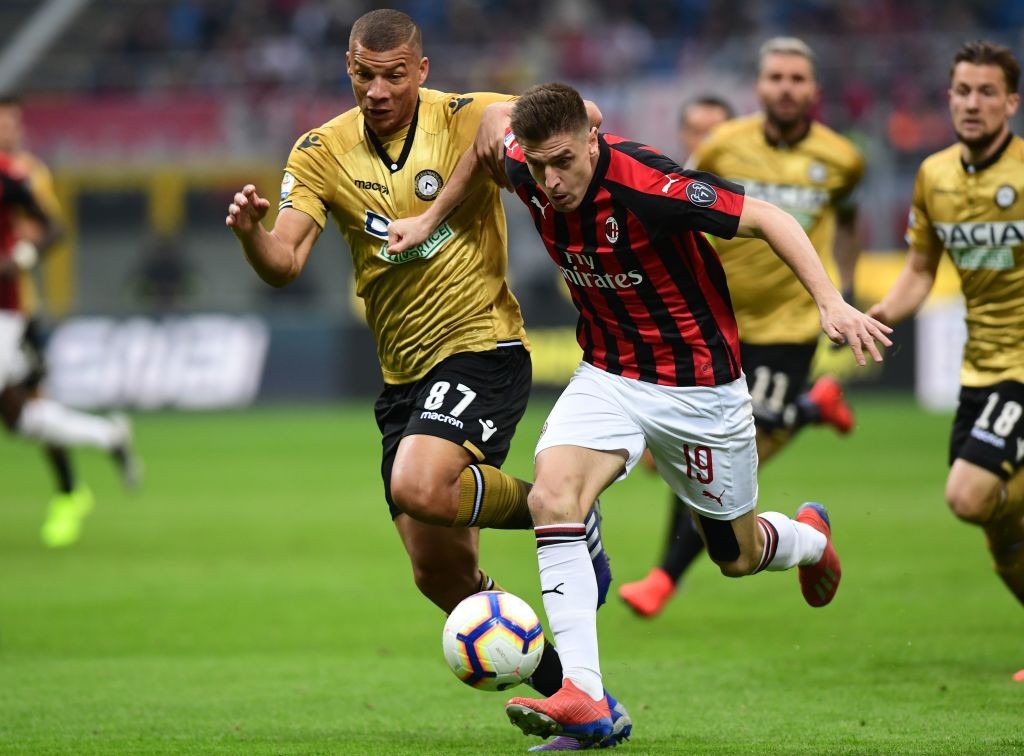 Preview: Serie A Round 20 – AC Milan vs. Udinese

AC Milan will be looking to get the second half of their 2019-20 season off to a better start than the first half when they host Udinese on Sunday.

Stefano Pioli’s side will be looking to avoid another disappointment like the 0-0 draw with Sampdoria earlier in the month and build on the 2-0 and 3-0 wins against Cagliari and SPAL respectively since.

Milan will also be looking to exact a bit of revenge, as Udinese prevailed 1-0 in the opening game of the season to give Marco Giampaolo the worst possible start to his time as boss.

As mentioned, the challenge for Milan will be to build on a good display against SPAL in the Coppa Italia during the week in front of a crowd that could reportedly exceed 60,000.

However, Stefano Pioli is expected to have a number of injury issues to deal with which could see a few changes from the XI which won in Sardegna last time out in Serie A.

Friday’s edition of La Gazzetta dello Sport states that Asmir Begovic will get his Rossoneri debut as Gianluigi Donnarumma continues to recover from a thigh injury.

Andrea Conti and Simon Kjaer – set for his league debut for Milan – will keep their places from the win on Wednesday as Mateo Musacchio and Davide Calabria miss out, with Alessio Romagnoli and Theo Hernandez also in the side.

Samu Castillejo will be on the right while Hakan Calhanoglu returns on the left as Franck Kessie and Ismael Bennacer return to the midfielder, and Rafael Leao will be up top with Zlatan Ibrahimovic again after both scored against Cagliari.

Udinese did not fare so well in their midweek cup game as they were comprehensively beaten 4-0 by Serie A leaders Juventus at the Allianz Stadium.

Despite this, the Bianconeri are having a good season under head coach Luca Gotti as they sit just one point behind Milan in the standings, and therefore five points behind Cagliari in the final Europa League spot.

Gotti doesn’t have anywhere near as many injuries to worry about as his opposite number, with centre-back Samir the only absentee.

Udinese are expected to start Kevin Lasagna and Stefano Okaka up front together in a 3-5-2 as they look to build on their three straight league wins, during which they have scored six and only conceded one goal.

The Friulians have already got the upper hand this season over the Rossoneri having won the opening game of the campaign at the Dacia Arena back in August.

In what was a scrappy game devoid of any real quality, Becao popped up with a header from a Rodrigo De Paul corner inside the final 20 minutes to give them the perfect start to the season.

Looking back at the last 28 league meetings between the two, the honours are actually fairly even. Milan have prevailed in 13 of them while Sunday’s opponents have been the victors on nine occasions, with six draws.

In the last three games between Milan and Udinese at San Siro there has been one win for each and a draw. The win for the Udine side came in the 2016-17 season, and is their only one at the Meazza since May 2007.

The 4-4-2 system that Pioli has deployed has been fascinating to watch so far and looks to have given Milan a certain purpose, intensity and – perhaps most importantly – some kind of end product to their play.

The ‘Leabrohimovic’ pairing up front has captured the hearts and imaginations of Rossoneri supporters, and will provide a tough test for an in-form Udinese back line.

However, it is Samu Castillejo who should be highlighted and commended for his recent performances. The hard-working winger has been a breath of fresh air compared to his out-of-form compatriot Suso and is a key part of the current system.

For the visitors, Rodrigo De Paul is without a doubt the best player Gotti has to call upon.

His control, technical ability, creativity and eye for a killer pass make him a threat in multiple situations – including set pieces – and it is no surprise to see him linked with a big move again this month. It will be up to Bennacer and Kessie to keep an eye on him at all times.

The recent defensive records of both teams points towards this being a scrappy game nicked by the odd goal, but we think the good form and confidence of the two sides could result in an entertaining encounter.

A rejuvenated Milan will have revenge on their minds as well as closing the gap on the European spots, so let’s hope they can edge this one against a tough opponent.