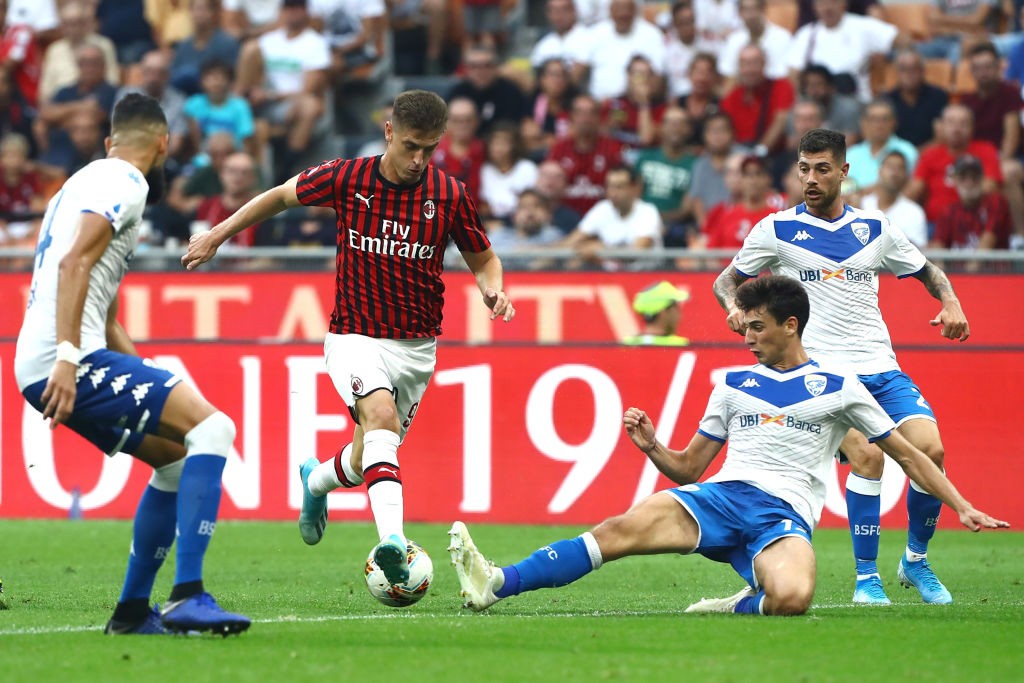 Preview: Serie A Round 20 – Brescia vs. AC Milan

AC Milan will have a rare Friday night game when they travel to the Stadio Mario Rigamonti to face relegation battlers Brescia looking to build on good recent form.

The Rossoneri will be looking to build off what has been a positive last three games in all competitions and continue their charge towards the European spots.

During their last three competitive fixtures, Milan have beaten Cagliari away from home as well as SPAL and Udinese at San Siro, the former in the Coppa Italia. They have outscored their opponents 8-2 in the process.

Now, Stefano Pioli’s side sit just two points back of the European spots.

The interesting news pre-match regarding selection has mostly come from Sky Italia, who reported on Thursday that Hakan Calhangolu and Mateo Musacchio will be back at Pioli’s disposal having recovered from their respective injuries.

Not only that, but Sky claim that both will instantly return to the starting XI. Calhanoglu will play on the left of midfield, while the former Villarreal man will again partner Alessio Romagnoli in the middle of the defence.

The strike pairing of Zlatan Ibrahimovic and Rafael Leao will remain, as will the partnership of Franck Kessie and Ismael Bennacer in midfield.

Sky are also reporting that Lucas Paqueta has asked to be left out of the squad for the trip north amid rumours that he is suffering with life away from the pitch.

Brescia have had what would be fair to describe as a turbulent return to the top flight, having started the season with Eugenio Corini before sacking him for Italy’s World Cup hero Fabio Grosso. He lasted less than a month before Corini got the phone call and accepted a return.

The Biancoazzurri currently sit second bottom in the Serie A standings and have subsequently found themselves firmly in the midst of a relegation battle. They have actually been in the bottom three since round nine, and have lost eight of their last 12 league games.

Corini will not have Mario Balotelli at his disposal as the striker will miss out again against his old club. The 29-year-old is suspended after being shown two bookings in seven minutes last week, the second for abusing the referee. He received a two-match ban.

In all likelihood Ernesto Torregrossa will up front with Alfredo Donnarumma, who is not related to either Gianluigi or Antonio.

Corini could also hand a debut to Simon Skrabb who signed this month and is expected to slot into the trequartista role.

Milan have had the better of meetings with Brescia historically and have actually lost just once in the last 20 encounters between the two sides, that coming back in 2003.

In addition to that, the Rossoneri have come out on top in 11 of those games, drawing eight and outscoring their opponents 37-18 across the 20 game spell.

The two teams have already met once this season and it came back in round two when Marco Giampaolo was still at the helm.

That day Milan prevailed 1-0 at San Siro thanks to an early goal from Hakan Calhanoglu, but the home side did miss a number of late chances to kill the game.

Normally the logical choice is to pick a forward who is likely to have a say in the outcome of this game, or a player who – especially with it being January – may have a last chance to impress and stay at the club.

However, eyes should be glued to the performances of both Mateo Musacchio and Andrea Conti on the right side of Milan’s defence. That particular area has been targeted by many teams as a weak link, and both have competition now in the form of Simon Kjaer and Davide Calabria (when fit).

Speaking of the transfer window, one player who has been repeatedly linked with a move to Milan is Sandro Tonali. The combative midfielder has revealed his love for the Rossoneri on many occasions as well as his idolisation of Gennaro Gattuso.

Could a good performance be enough to tempt Paolo Maldini and Zvonomir Boban to try their luck with a late bid?

Despite the contrasting form of the two sides and the 11 places between them in the standings at present, this might not be the walkover some are expecting.

Milan are still somewhat figuring out the 4-4-2 system and a sold out home crowd – the first of the season for Brescia – could make this a difficult evening. Nonetheless, we expect Milan to edge it.