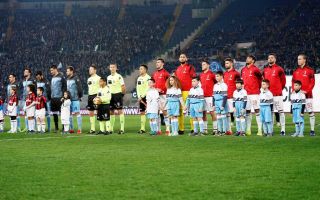 AC Milan will be looking to put a disappointing result behind them when they travel to the capital to face Lazio on Saturday.

The Rossoneri drew 2-2 with relegation-battling SPAL in Ferrara having trailed 2-0 at half-time and having played over half of the game with a man advantage.

There were positives to be taken from the battling spirit that Pioli’s men showed, but it is definitely a game viewed as two points dropped especially given how Roma and Napoli also both lost.

Stefano Pioli highlighted in his pre-match press conference that his side cannot let their wastefulness in midweek become a habit, especially against a side like Lazio.

Pioli will not be able to call upon injured centre-back duo Mateo Musacchio and Leo Duarte once again as they continue their respective recoveries, but the biggest blow comes through the absence of Samu Castillejo.

The Spaniard limped off in the first half of Wednesday’s game with what the club have since confirmed is a hamstring strain. He will likely be replaced by Samu Castillejo in the starting XI.

There are also conflicting reports about whether Pioli will opt to play Zlatan Ibrahimovic from the first minute, though his pre-match comments suggest that the Swede’s recovery is still being carefully managed.

Therefore, we think Milan will line up with Gianluigi Donnarumma in goal protected by a back four from right to left of Davide Calabria, Simon Kjaer, Alessio Romagnoli and Theo Hernandez.

Franck Kessie and Ismael Bennacer should be the anchormen in the midfield with Saelemaekers, Lucas Paqueta and Hakan Calhanoglu ahead of them, supporting Ante Rebic with Ibrahimovic not risked.

Lazio have been absolutely flying this season under Simone Inzaghi, having won 21 of their 29 Serie A games so far, losing just three times and putting up a serious Scudetto challenge.

They sit just four points behind leaders Juventus, although the Old Lady could be seven clear as they kick-off first this weekend, however Simone Inzaghi’s side will keep fighting until the end as they aim to bring a third Scudetto to the blue half of Rome.

The Aquile come into the game off the back of two 2-1 victories over Fiorentina and Torino – both of which they came from behind in.

Inzaghi has somewhat of a selection nightmare to content with as Lazio will be without both top scorer Ciro Immobile – who has scored 32 times this season – and his deputy Felipe Caicedo, as both are suspended.

As a result Joaquin Correa is expected to start up front which is ahead of his usual position, while Luis Alberto will then play in behind which again is further forward than he is used to, meaning Andre Anderson could come into midfield.

The Rossoneri have won 11 of the last 28 Serie A meetings between the two sides and have lost just five times in that period, with 12 draws.

Over the aforementioned 28-game stretch Milan have won four times and lost four times in the capital against Lazio, dating back to 2006.

The two sides have of course already played this season at San Siro, with Inzaghi’s men running out 2-1 winners thanks to goals from Immobile and Correa.

The easy option for Milan would be to pick out Ante Rebic, who has nine goals in his last 10 Serie A appearances, and he looked off the pace on Wednesday so will be looking to respond.

However, the key thing in this game will be for the Diavolo to keep a clean sheet and if Simon Kjaer is inserted into the back four again, they have every chance against a decimated Lazio attack. If they keep goals out at that end, Pioli will fancy his side to nick at least one at the other.

Correa will have the task of leading the line in the absence of Immobile and Caicedo, and his record of three goals in four appearances against the Rossoneri is a daunting one.

If he and Luis Alberto can cause enough trouble to keep Milan pinned back then it could be a long afternoon for the away side.

A fully-fit Lazio without a doubt comes into this game as favourites, however their lack of attacking options leaves them a tad lightweight.

Nonetheless it would be naive to assume that makes it an easy game for Milan who have issues of their own, so we think that a draw is the most likely outcome.