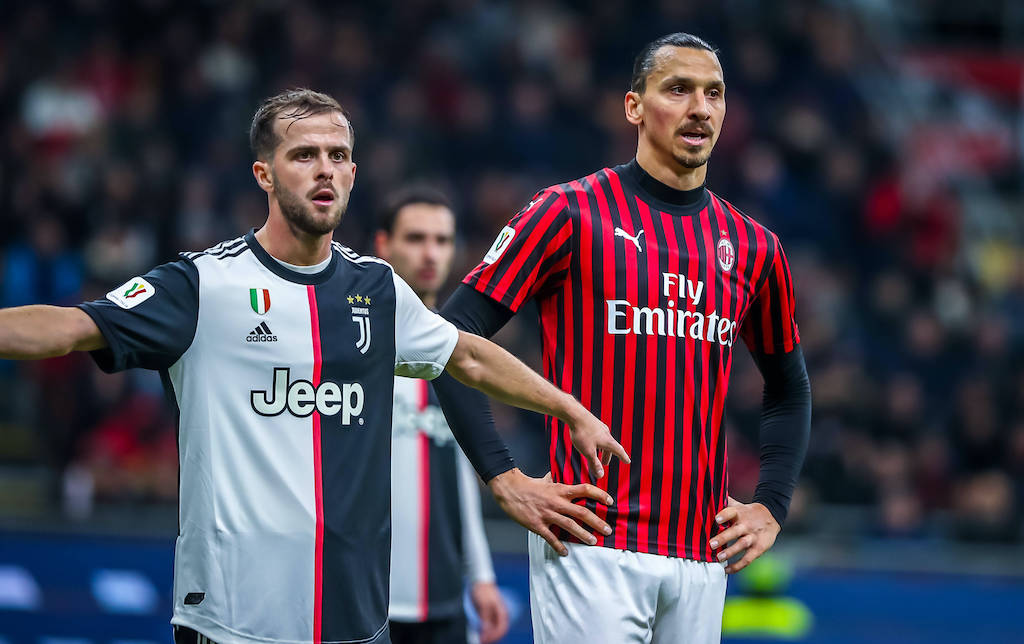 Preview: Serie A Round 31 – AC Milan vs. Juventus

AC Milan will be looking to continue their excellent form since returning from the break when they face league-leaders Juventus on Tuesday night.

Pioli will not be able to call upon injured centre-back duo Mateo Musacchio and Leo Duarte once again as they continue their respective recoveries, while Samu Castillejo will also be missing as he is battling a hamstring strain.

Both Theo Hernandez and Hakan Calhanoglu went off during Saturday night’s win but are available for selection as they just sustained knocks.

The latest reports suggest Pioli is leaning towards confirming the starting eleven he used against Lazio. Zlatan Ibrahimovic was only used 45 minutes and thus has the energy in his legs to start again, meaning Ante Rebic might have to step back once again in favour of the Swede.

That means Gianluigi Donnarumma would be protected by a back four of Andrea Conti, Simon Kjaer, Alessio Romagnoli and Theo Hernandez, with Franck Kessie and Ismael Bennacer in midfield.

Alexis Saelemaekers will start on the right again with Giacomo Bonaventura the playmaker and Hakan Calhanoglu wide left supporting Ibrahimovic.

Juventus are motoring towards yet another title despite what looked like a very close Scudetto race this time a month ago.

The Bianconeri beat city rival Torino 4-1 on Saturday evening to make it seven league wins in a row, and Cristiano Ronaldo was once again on the scoresheet for his 29th goal of the season, with 25 coming in his last 26 games.

All three of their losses in the league have come on their travels however, while Juventus will be without Matthijs De Ligt and Paulo Dybala, who were booked against Torino and subsequently suspended.

Of course, this is a big boost for the Rossoneri as the Argentine striker has always done well against them.

Juventus have won 17 of the last 26 Serie A meetings between the two sides dating back to 2006, including each of the last six.

However, Milan have already faced their Turin rivals three times this season and have drawn twice: Dybala got the winner in the league meeting late last year but 1-1 and 0-0 draws in the Coppa Italia semi-finals then followed, with Sarri’s side going through on away goals.

The general consensus is that the Rossoneri have been the better side over the 270 minutes of action seen so far this season, but you have to go back to the 2016-17 campaign and Manuel Locatelli’s winner under Sinisa Mihajlovic to find the last time Milan beat Juve at San Siro.

Here is Locatelli's screamer that won Milan the game against Juventus! He is 18-years-old ladies and gentlemen. #MilanJuventus pic.twitter.com/s7armBQjQi

Zlatan Ibrahimovic missed the return leg of the Coppa Italia semi-final due to suspension, and he will look to get one over on Cristiano Ronaldo when the two teams meet on Tuesday night.

However, the most important task will fall to Conti, Kjaer and Romagnoli in particular. If they can keep Ronaldo and Higuain quiet and keep a clean sheet, Milan have every chance of recording a famous win against their old foes.

If Bennacer and Kessie can boss the midfield battle too with their high press, it could be a night to remember.

Juventus though are always tough customers at San Siro and have been for many years. They have a huge wealth of talent from front to back, but the attention has to be on their Portuguese No.7 due to his ridiculous run of form.

It will also be interesting to see how Miralem Pjanic performs in such an important role knowing that his future lies at the Nou Camp next season, with a swap deal involving Arthur confirmed with Barcelona.

History and form suggest this is going to be a game fought with incredible intensity, with both teams looking to prove their recent results are not a fluke but rather an indication they have turned a corner and have the ability to dominate anyone.

The under 2.5 goals stat above is striking, and we think there will be little to separate the Rossoneri and Bianconeri in a game where both might actually take a point.

READ MORE: Sarri admits facing Milan will be ‘complicated’ for Juve as it has been ‘all season’