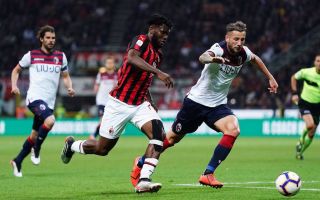 Preview: Serie A Round 34 – AC Milan vs. Bologna

The business end of the season continues as Milan have their second home game in four days, facing Bologna at San Siro on Saturday night.

Milan are motoring towards a Europa League spot having won five of their seven league games since the resumption of Serie A including big victories over Roma, Lazio, Juventus and most recently Parma.

The Rossoneri came from a goal down on Wednesday night to win 3-1 at home, with Franck Kessie and Hakan Calhanoglu’s respective thunderbolts being the highlights of an entertaining encounter.

Bologna – fresh off the back of a draw against Napoli – will be tricky customers for Stefano Pioli’s side though, something he highlighted in his pre-match press conference.

The main headline for Milan is that Alexis Saelemaekers will return after he was suspended for the win over Parma, and Gazzetta dello Sport are reporting that he will be straight back into the starting XI.

Pioli will not be able to call upon injured centre-back duo Mateo Musacchio and Leo Duarte once again as they continue their respective recoveries.

Samu Castillejo is edging closer to a return but he will also be missing as he is battling a hamstring strain, with the latest reports suggesting that he could be back for the game against Sassuolo, or Atalanta at the latest.

The paper claims that Milan will field the same back five from the win over Parma, where Davide Calabria once again will be on the bench.

Franck Kessie will be partnered by the returning Ismael Bennacer, while Alexis Saelemaekers is also back from a ban and will be accompanied by Hakan Calhanoglu and Ante Rebic to his left, with Zlatan Ibrahimovic set to get the nod up front again.

Bologna have had an up-and-down season and currently sit in 10th position in the standings, 10 points behind Milan. The headline of the campaign for them has been the ongoing health battle for manager Siniša Mihajlović, the former Rossoneri manager who we would like to wish the very best to.

The Rossoblu come into the game off the back of an impressive 1-1 draw at home against Napoli, but they have won just once in their last five and – just like Parma – have slipped out of the Europa League race, though their win did come at San Siro against Inter.

Mihajlovic has some doubts regarding injuries in his squad, but Andrea Poli and Federico Santander are expected to have returned to full fitness after they were in the squad for the game in midweek.

Roberto Soriano also returned for that game and is expected to partner Andreas Skov Olsen and Barrow, while star man Riccardo Orsolini is pushing for a return to the XI after being brought off the bench against Napoli.

This has been one of Milan’s more one-sided games in Serie A since the turn of the century, with the Rossoneri having prevailed in 14 out of the last 21 league games between the two sides dating back to 2008.

Bologna did win 1-0 against Milan at San Siro back in the 2015-16 season, but before that you would have to go back 12 years to find the last time the Rossoblu prevailed at the Meazza.

The two sides met earlier in the season at the Stadio Renato Dall’Ara and Milan prevailed 3-2 in a thriller.

Krzysztof Piatek’s penalty and Theo Hernandez’s strike had given Pioli’s side a comfortable lead before the latter scored an own-goal to halve the lead.

Giacomo Bonaventura extended the advantage once again immediately after the break, and the Rossoneri were forced to hang on after Nicola Sansone’s late goal had made it 3-2.

There are a number of candidates for the award of ‘Player Since The Restart’, but you can arguably make the strongest case forHakan Çalhanoglu. He has amassed three goals and four assists in seven games since the resumption of Serie A to remind everyone of the player that he was in Leverkusen.

Musa Barrow appears to be the main threat for Bologna as he has the highest WhoScored rating of the entire squad, having amassed eight goals this season, but if Orsolini starts then his combined 13 goals and assists are also worth a mention.

Despite Milan’s form it would be naive to expect a walkover, especially against a former head coach, and result results have suggested Bologna can cause serious problems.

Nevertheless, we expect a tighter defensive performance and the run of scoring two or more to continue ahead of tough games against Sassuolo and Atalanta.