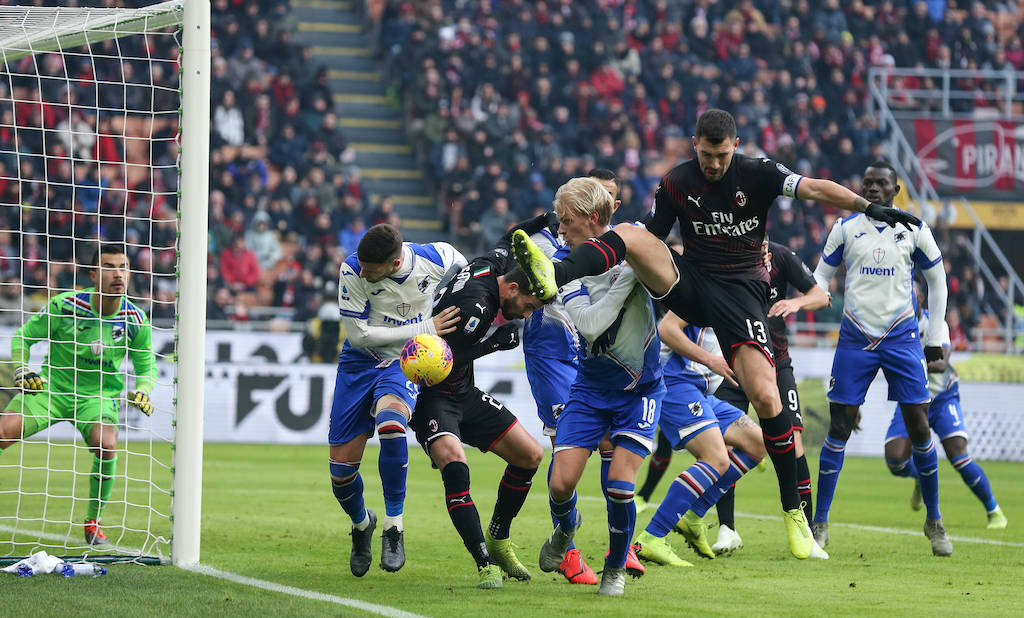 Preview: Serie A Round 37 – Sampdoria vs. AC Milan

AC Milan will play their final away game of the campaign on Wednesday night as they make the trip to face Sampdoria.

Pioli battled a crisis during Friday’s 1-1 draw against Atalanta as Theo Hernandez and Ismael Bennacer were both suspended with Andrea Conti, Alessio Romagnoli, Mateo Musacchio and Leo Duarte all injured.

Nonetheless, the Rossoneri fought hard for a 1-1 draw to continue their unbeaten run – which now stands at 10 games – before a tricky trip to the Marassi to face a resurgent Sampdoria side who have secured survival at a canter.

You can read Pioli’s comments ahead of the game here, as well as the 23-man squad selected.

As mentioned, Milan’s makeshift back line did a fantastic job of keeping out the league’s best attack on Friday night, and Pioli’s job will get a bit easier for this midweek game.

According to La Gazzetta dello Sport, the Milan boss will welcome a key duo back into his starting XI as Theo Hernandez and Ismael Bennacer are both back from suspension.

Andrea Conti’s injury means Davide Calabria gets the not at right-back with Kjaer and Gabbia the centre-backs. Saelemaekers, Calhanoglu and Rebic are tipped to support Ibrahimovic up front, with Bennacer partnered by Kessie in midfield.

It has been a very strange season for Sampdoria, who were tipped to perform better this campaign under Eusebio Di Francesco, but the former Roma boss was sacked after losing six of his first seven games in the place of another ex-Giallorossi boss in Claudio Ranieri.

He has experienced a rollercoaster since arriving, but a run of five wins in his last eight (including a run of five victories in six games) has seen the Blucerchiati achieve survival comfortably, as they now sit in 15th.

In terms of team news for the home side, Morten Thorsby will miss out after being dismissed for a second yellow card against Juventus, while midfielder Albin Ekdal and forward Felice D’Amico will miss the game through injury.

Looking back at the last 26 times this fixture has been contested in Serie A all the way back to 2006, it is surprisingly an even split of seven wins a piece with 12 draws between the Rossoneri and Wednesday’s opponents.

Milan actually haven’t won at the Marassi against the blue half of the city in four years, and Samp have won the last two iterations of this fixture without conceding (1-0 and 2-0 respectively).

The two sides of course have already met earlier this season, and it was a drab 0-0 draw at San Siro which put a slightly sour note on the game that was designated as the homecoming and debut of Zlatan Ibrahimovic.

This will be a real litmus test for Matteo Gabbia at the back, presuming he starts for Milan. He will face two expert Serie A forwards in Gabbiadini and Quagliarella, meaning he and his partner Simon Kjaer will have to be on top form.

In many ways Romagnoli’s injury could be a blessing for the 20-year-old as he will now get game time so the Rossoneri management can assess where he is at ability-wise.

For Sampdoria their main threat is intrinsically linked to the aforementioned. The strike pairing of Gabbiadini and Quagliarella have combined for 22 goals this season, and their hope will be to get a lead in the game and to then sit back and frustrate.

Games between these two sides at the Marassi are very rarely high-scoring despite the stats above that suggest Samp and Milan are very entertaining sides to watch.

The hosts have wrapped up survival but can go no better, while Pioli’s men will want to keep the fight for fifth spot alive and therefore should edge this if they play with conviction.