Preview: Serie A Round 12 – Sassuolo vs. AC Milan

With Montella’s future in doubt, AC Milan will travel to an also troubled opponent in Sassuolo, who sit one spot above the relegation zone.

After another 0-0 draw against AEK Athens in the Europa League, the Rossoneri hope to regain their pre-season form by beating a struggling Sassuolo side, who sit 17th in the standings, having only claimed 8 points out of 11 games.

La Gazzetta Dello Sport’s predicted lineup sees captain Leonardo Bonucci returning to the starting line-up after sitting out the Serie A games against Chievo (1-4) and Juventus (0-2) due to a suspension.

Montella will stick with his three at the back formation, starting Zapata and Romagnoli along with Bonucci, and will most likely start Locatelli (or Montolivo) in the four-man midfield next to Kessie, whilst Rodriguez and Borini will start as wingbacks. The front three will consist of Calhanoglu and Suso in the wings, with Kalinic playing as the centre-forward.

Bonaventura, Calabria and Biglia still suffer from minor injuries and won’t be included on the team sheet. This also applies to Conti, who won’t return before January 2018.

Sassuolo’s poor start to their 2017/18 campaign is largely down to the many injuries that Cristian Bucchi’s side suffers from. With Berardi, Goldaniga, Adjapong, Dell’Orco, Frattesi, Letschert and Duncan all out due to injuries, Sassuolo’s predicted line-up is a 4-3-3. 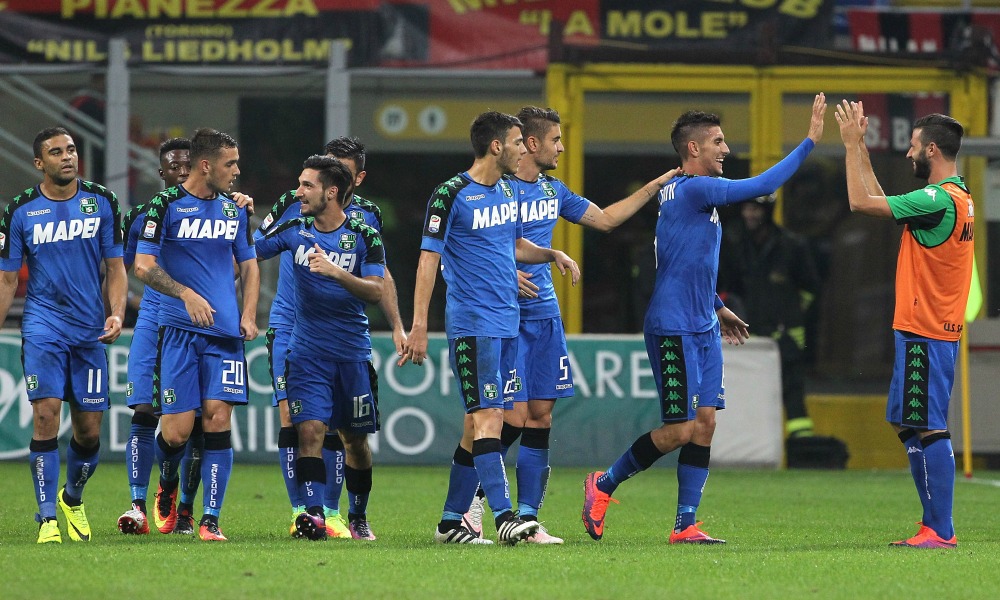 The two sides met at Stadio Città del Tricolore on a Sunday afternoon on March 6. The match ended in a 2-0 win for Sassuolo after Alfred Duncan and Nicola Sansone both found the top-right corner of the net in minute 27 and 71 respectively. Sassuolo’s win was overshadowed by a red-card for French striker Gregoire Defrel (now at AS Roma).

AC Milan – Suso: The only positive thing about AC Milan’s disappointing campaign so far has been that right-winger Suso has shown consistent performances in a struggling side. The Spanish international has scored 4 goals and assisted 4 in the last 10 Serie A games. With a potential of becoming the new Robben, Suso has shown the Milan board why they were right to extend his contract with the Rossoneri.

Sassuolo – Politano: With Berardi out injured, Matteo Politano has had to step up his game to get results out a weakened side. The 24-year-old has a similar style to that of Suso and after scoring two goals so far this season, he will pose a serious threat to Milan if given enough space to shoot with his left foot.

AC Milan have always struggled to get a result against Sassuolo in recent years, especially away from home. But with an in-form Suso leading the front line, the team should be capable of winning in the Città del Tricolore. The slow defence of Sassuolo will leave similar gaps for Calhanoglu, Kalinic and Suso to take advantage of like the Rossoneri did versus Chievo. But it won’t be easy…