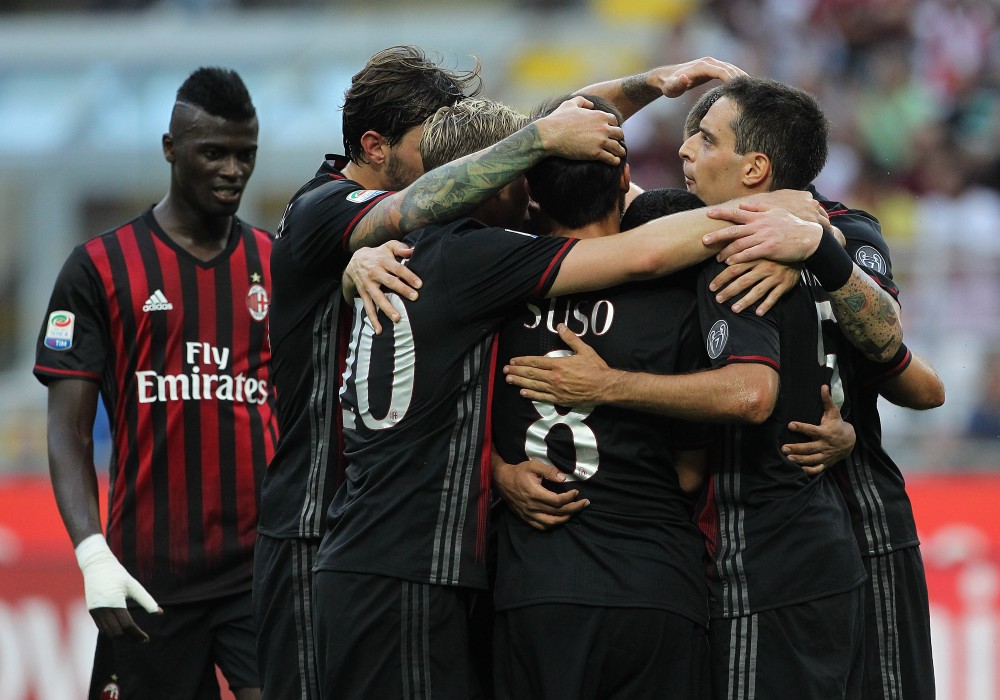 AC Milan pursue a second consecutive win to kick off their Serie A challenge, this time against a tough Napoli side at the Stadio San Paolo.

Coming off an exciting 3-2 win over Torino in the first game of the season, we finally see some form of identity from a Milan side lacking.

New coach Vincenzo Montella has worked early season magic; transforming an apprehensive and lost side into a strong working unit. Focusing on possession and forward momentum.

Carlos Bacca celebrating his second of three goals against Torino.

This will be no walk in the park against Napoli however; The Naples side finished second in last year’s Serie A. Consistently finishing among the top sides in Italy for quite some time now, Napoli will look to extend their run of form.

In the last ten meetings between the clubs, Milan could only muster a single win, four draws and five loses. Additionally the Rossoneri have only picked up two points in their previous five outings at the San Paolo.

Napoli have achieved a minimum of two goals in each of their last six Serie A matches. Conversely, Milan have conceded two or more goals in six of the previous nine fixtures.

We now have a firm understanding of how Montella prefers to line up.

During last week’s game against Torino we saw again the 433 utilized with a regista in front of the defense. Again we saw Bonaventura in the mezz’ala role, which is where he will be expected to play throughout the season, barring injury or suspensions. Also of note, Gabriel Paletta received the season’s first red card, paving the way for a Gustavo Gomez debut.

during the Serie A match between AC Milan and FC Torino at Stadio Giuseppe Meazza on August 21, 2016 in Milan, Italy.

Napoli have sold their star striker, Gonzalo Higuain to Juventus for an unprecedented sum in the Italian top flight, but with the departure came reinforcements in the forms of Arkadiusz Milik and Piotr Zielinski.

Milik, a prolific striker from Ajax scored twenty-one goals last season as well as seven assists in the Eredivisie.

Expect to see a Napoli side ready to play at the club’s best to pick up their first win of the season.

A player everyone should be excited to see debut is Gustavo Gomez. The young Paraguayan defender received top honors for his time at Lanus. Gustavo was a late substitute in Milan’s final preseason game; a victory against Freiburg.

Gomez showed a lot of promise, while making a small handful of young mistakes. Look forward to seeing what he can do with his new defensive partner.

Dries Mertens is consistently starting from the bench for Napoli and wrongfully so. Last week Napoli were losing 2-0 against newly promoted Pescara. In comes Mertens and within ten minutes of being on the pitch had scored two goals just three minutes apart.

Dries is an engine for their squad and should be given more playing time. If the man plays from the bench against Milan, do not get comfy until the final whistle because he can change the scene in an instant.

February 22, 2016, was the last time the two sides met. A game that finished 1-1 but saw Napoli dominate in every facet of the game minus goals scored. Napoli have historically been a tough side for Milan and expect Saturday to be no different.