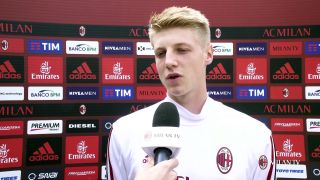 AC Milan Primavera star Marco Brescianini has revealed that he will be looking to follow the lead of Ismael Bennacer in order to make the jump to the first team.

We recently did a series looking at three current players from the youth team who are close to potentially cracking the senior side, and Brescianini was the third instalment.

Throughout the 2019-20 season with Milan’s Orimavera, Brescianini has played as a central midfielder in all of the 12 games he has featured in. He has contributed with six goals and two assists in those games – averaging a goal every other game – which is a very impressive average for a central midfielder.

He is tipped for a bright future at the club, but while football has taken a break due to the ongoing COVID-19 emergency he spoke to Radio Rossonera about his time at Milan so far, starting with his struggled.

“For 2-3 years I played very little, my physique did not improve. But I’ve always worked so hard and I’ve never given up. How nice was the debut with the senior team, in an International Champions Cup match. Then I realised I could do it,” he said.

On his football idols: “For mentality I say Cristiano Ronaldo, a formidable athlete. As a Milan player I say Kaka who made the Rossoneri history. A midfielder like me whom I respect so much is De Bruyne, a complete midfielder.”

Brescianini has asked what current Milan player he would like to follow the path of and learn from.

“Bennacer impressed me, he is a model because physically he is not a giant, but he has extraordinary technical quality. He always wins duels. I also try to steal the secrets from Bonaventura, another footballer who has technique to sell.”