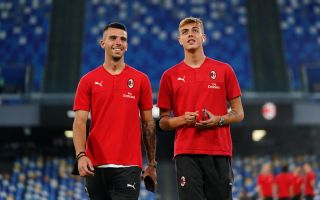 Yesterday, Serie C side Pergolettese announced the signing of Matteo Soncin from Milan. The Primavera star’s five-year adventure with the Rossoneri has thus come to an end.

In addition to starring for the Primavera side, Soncin often found himself on the bench for the first team as the third-choice goalkeeper. Of course, he was never called into action but it’s still an achievement.

On his official Instagram page, he published a long farewell message to the Rossoneri environment:

“5 years ago I became part of this family! Thanks to you Milan, I grew up as a footballer but above all as a man! Now it’s time for me to start a new experience. Thanks will never be enough. It has been 5 fantastic years where I have spent the best moments of my life so far! I have met people who will remain forever in my heart.

“Thanks to the company, staff, warehouse workers, doctors, educators and above all, my teammates and brothers who have shared everything with me, from the good and the bad times, to the sacrifices made during these years. See you soon, Soncio,” he stated.