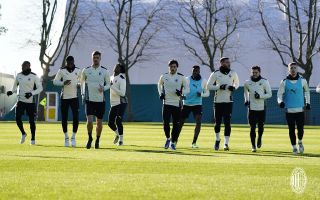 The majority of AC Milan’s starting line-up for Thursday night’s Coppa Italia round of 16 game against Genoa picks itself, but there are still a couple of decisions for Stefano Pioli to make.

According to what is being reported by MilanNews, one of those battles is in goal where Mike Maignan and Antonio Mirante are competing for the starting spot, and if the latter were to get the nod it would be his official debut for Milan after joining as a free agent.

In defence Alessandro Florenzi should rest with Pierre Kalulu shifting over to the right-back position, while Fikayo Tomori returns from Covid-19 to partner Matteo Gabbia, and Theo Hernandez should be on the left.

Sandro Tonali is almost certain to start in midfield as he is disqualified against Spezia in the league on Monday night, with one between Rade Krunic and Tiemoue Bakayoko to partner him.

Regarding the attack, Olivier Giroud will be leading the line because Zlatan Ibrahimovic is suspended, supported by Alexis Saelemaekers on the right, Daniel Maldini as the playmaker and Ante Rebic on the left.