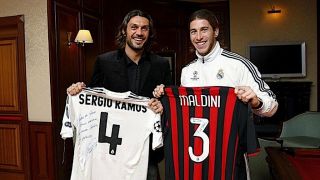 Real Madrid captain Sergio Ramos would ‘tremble’ if he got a phone call from AC Milan director Paolo Maldini, according to a former player.

Interestingly, there have been some tedious reports in recent months linking Milan with a possible move for Ramos, who is out of contract at the end of the season and could try a new adventure.

Eduardo Inda (as reported by Calciomercato.it) recently stated that at the moment Ramos and Real are very far apart regarding renewal talks, and that Juventus and Milan are also ‘following the evolution of the story’ and are waiting for the right moment to launch their attempt.

Ramos has of course previously admitted his admiration for Milan, naming them the second biggest club in the world after Real Madrid in terms of history, and PianetaMilan added that his contract situation has piqued the interest of a number of different clubs, including Milan

Lele Adani – a former footballer and now a pundit – spoke to Bobo TV about Milan and about Paolo Maldini as a technical director, passing an interested comment on Sergio Ramos.

“If Maldini goes to Real Madrid he can avoid asking permission because they open the door for him while he is still on the street,” he said (via MilanNews).

“If Maldini goes and says to give him Sergio Ramos’s number, Ramos trembles because Maldini is on the other side of the line. So if Maldini has to deal with Kalulu, Hernandez or Tomori, he will say his opinion, despite the fact that there are other good managers like Moncada and Massara.”