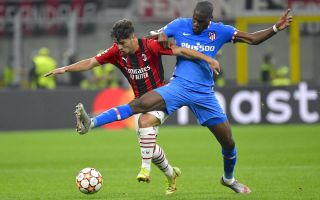 Real Madrid are keeping a close eye on the exploits of playmaker Brahim Diaz as he continues to dazzle at AC Milan.

The 22-year-old attacking midfielder had another good game against Atletico Madrid last night as he amassed another assist, setting up Rafael Leao to make it 1-0 before leaving just prior to the hour mark looking exhausted after another hard-working shift.

He has four goals this season with three of them being game winners, but Brahim Diaz’s future remains a question mark. He signed on a loan deal until the summer of 2023 but it remains an unknown whether there is an option to buy and a buy-back in favour of Real Madrid.

What doesn’t help is that Real Madrid are observing his growth, as confirmed by Filippo Ricci to ‘Tutti Convocati’, with his comments relayed by MilanLive.

“Surprise in Madrid, Zidane didn’t see him here, Ancelotti understood that it was better to let him go on loan again, now he is observed with curiosity. Talent has always had it, has shown less, we hope it will find continuity,” he said.