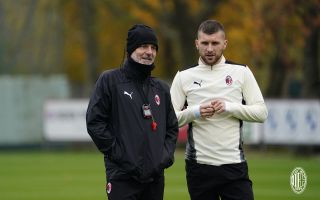 Giornale: Pioli could be without Rebic for a month or more after latest set-back

AC Milan could be without Ante Rebic for a few weeks as the medical staff nervously await the results of his check-up, a report claims.

According to this morning’s edition of Il Giornale (via MilanLive), it seems that the Croatian winger has a problem with a flexor that he picked up after injuring his heel in training yesterday. Tests are awaited to understand the exact extent of the injury and what the recovery time will be.

The paper believes that Rebic could be out for a month or even more as it could be an absence similar or even worse than the one caused by the previous left ankle injury. It would be a big blow for Milan, who have a lot of matches before the Christmas break and Rafael Leao has been working overtime already.

Updates are expected shortly on how the 28-year-old is, in the meantime he will certainly miss today’s away match against Fiorentina and most likely will also miss Wednesday’s trip to the Spanish capital Madrid to face Atletico.