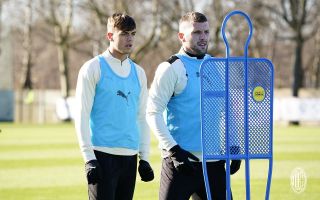 Ante Rebic is back after a length injury lay-off and is hoping that the Coppa Italia will be the perfect arena to mark his first start with a goal.

MilanNews writes that Rebic should get the nod to be in the starting XI for tomorrow’s round of 16 clash against Genoa, which will be his first start for more than two months after he got injured in Milan’s 3-2 comeback win over Hellas Verona on October 16.

He came off the bench to feature in the closing stages of the 3-0 victory against Venezia on Sunday but he is ready to get back to scoring important goals and putting in the kind of performances that can make him one of the potentially most decisive players in the second half of the season.

The feeling among the staff is that the Genoa game is the right opportunity to get the Croatian back into action, so he can rediscover the rhythms of the game from the first minute and get back towards full match fitness.

Pioli meanwhile is well aware of the qualities of the former Eintracht Frankfurt man, who offers a versatility option too given he can also play as a striker if needed while Pietro Pellegri is out.

“I think he is a strong forward, who has quality, aggression and physical strength. He did well both as a central striker – we played great games with him as centre-forward and with Leao on the left – but he can also do well starting from the left. Now he has to find the best condition and it will be an additional weapon for the team,” he said.