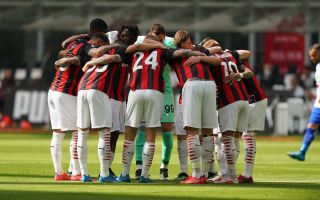 Records broken and a fountain of youth: All the best stats from Milan’s 2020-21 season

A long and arduous campaign came to an end last weekend with AC Milan sealing a second-placed finish and a return to the Champions League.

The team broke records with how good they were in the first half of the season but some struggles in 2021 threatened to produce another season outside the top four, but they got the business done against Atalanta on Sunday, winning 2-0.

Below are the main statistics from an incredible rollercoaster season, as relayed by the club’s official website…

➤ Milan won 16 away games in the league this season, setting a new record for away wins in a single Serie A season: surpassing Inter in 2006-07 (15). The 16 away wins is also a joint high in the top five European leagues, matching Real Madrid and Manchester City in this particular ranking. The Rossoneri also finished with the best attack (43 goals scored) and the best defence (17 conceded, tied with Inter) in away games.

➤ Only two of the goals conceded by the Rossoneri this season came from outside the box, the best record among the 20 teams in the top flight in 2020-21.

➤ 41.9% of the goals scored by Milan this season came from dead ball situations: only Benevento recorded a higher percentage over the course of the 2020-21 Serie A season.

➤ Milan conceded 41 goals in the league, compared to their 48 Expected Goals: This gap of -7 is the best among all 20 teams in Serie A.

➤ The Rossoneri were the team who lost the fewest number of points from winning positions: Just five from 26 matches.

➤ Zlatan Ibrahimović, at 39 years and 169 days old, became the oldest player to reach 15 goals in a single Serie A season. Milan earned 15 points thanks to goals scored by the Swedish striker: In this regard, only four players have done better than Ibra in the whole championship.

➤ Theo Hernández is the only defender in the top five European leagues to have scored two braces in 2020-21. The French full back is also the defender with the most successful dribbles in Serie A this season (73).

➤ 100% of the goals scored by Franck Kessie this season (13 out of 13) were scored with his right foot. The goal scored by the Ivorian midfielder against Udinese after 96 minutes and 19 seconds of play was the fourth latest goal scored in a Serie A match in 2020/2021.

➤ The goal scored by Rafael Leão after 6.7 seconds in Sassuolo v Milan is the fastest in the history of Serie A as well as the top five European leagues.

➤ Ante Rebić scored eleven goals against an Expected Goals tally of 6.02: The difference of +4.98 is the second-highest in all of Serie A.