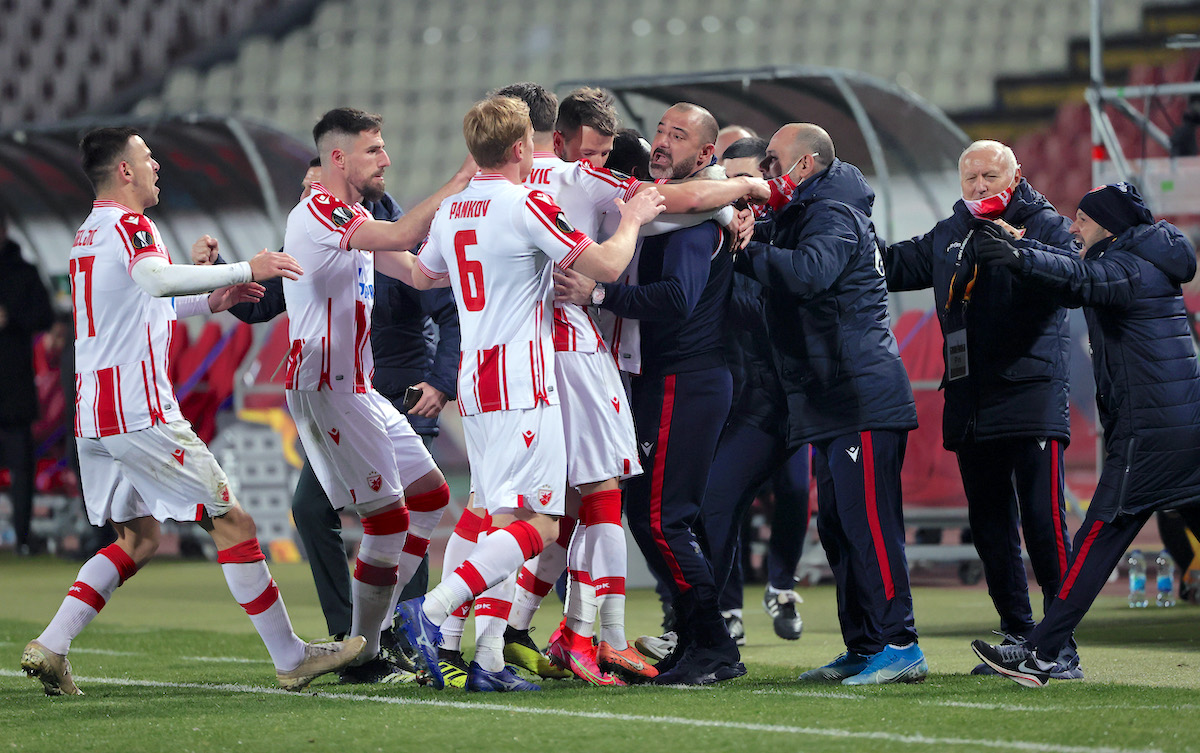 AC Milan threw away the lead twice including conceding an equaliser in added time against 10 men as they drew 2-2 in Belgrade against Red Star.

The Rossoneri would take the lead on the ground that they have played on twice before back in 2016 and in 1988, having had two goals disallowed early on. Radovan Pankov could only watch on in horror as he diverted a cross the wrong was and the ball rolled over the line.

The home side would level from the penalty spot though as Alessio Romagnoli’s handball gave Kanga the chance to equalise and he made no mistake, undoing the hard work until that point.

However, Milan answered back by winning a spot kick of their own as Theo Hernandez went down before dusting himself off and sending the goalkeeper the wrong way.

It wouldn’t be enough despite the hosts going down to 10 men though, as substitute Milan Pavkov rose highest in added time to somehow score from a corner with the back of his head.

The two away goals mean that the Diavolo are still in a good position heading into the return leg, with the derby against Inter on Sunday looming and a trip to Roma being the fixture after the second leg.

Milan thought that they had taken a lead inside the seventh minute with their first threatening attack of the game as Rade Krunic put Castillejo through on goal with an excellently weighted pass, but the offside flag rightly went up after the Spaniard’s composed finish.

Gianluigi Donnarumma was called into action for the first time as a clearance fell kindly to Kanga in space on the edge of the box, though his first-time effort whistled into the arms of the Italy international.

Inside the ninth minute Rebic was fed into space down the left side, but the Canada-born Borjan in the Red Star goal got down well to parry his effort wide, and Meite headed over at the near post from the resulting corner when he arguably could have done better.

The frantic start continued as the away side would have yet another goal ruled out. A looping cross to the far post was put back into the danger area by Mandzukic where Theo Hernandez was on hand to tap into a virtually empty net from six yards with the keeper stranded, however VAR adjudged the Frenchman to have controlled it with his hand before finishing.

Milan’s play was moving nicely through the adapted No.10 Krunic, and the Bosnia international – who is a boyhood Red Star fan – tested Borjan with an excellent strike from just outside the box having teed himself up with his first touch.

Red Star provided a reminder of the danger they pose when Donnarumma made a fine stop with his legs to deny Ivanic, who had been found making a dangerous run into the box from the right side.

Rebic really should have given the Rossoneri the lead not long after when another flowing counter-attack moved through the final third at frightening speed, ending with the Croatian firing narrowly over when almost through on goal following Krunic’s feed.

Again Donnarumma was required to make an excellent stop, this time at full stretch to deny a 20-yard howitzer from Ivanic that was flying into the bottom-left corner.

Milan had another half-chance just before the half-four mark as the fast pace continued at the Marakana. Rebic played a gorgeous nutmeg through-ball to the onrushing Theo Hernandez, who took a touch inside the area but was ultimately jockeyed off the ball before he could set himself and shoot.

There was a big worry for Milan ahead of Sunday’s derby against Inter as Bennacer limped off in the latter stages of the first half with what looked like another thigh problem. Sandro Tonali came on in his place.

However, that pain was quickly forgotten about when Milan took the lead less than five minutes before the break. Castillejo’s darting run ended with the winger squaring a ball into a dangerous area, and Pankov could only watch in horror as his touch took the ball past the keeper and it rolled over the line.

🤭 #ACMilan take the lead through a howler of an own goal.pic.twitter.com/uN7qWnMorq

There was a change made at the break as Rafael Leao came on for Rebic, and the first real action of the second period came when Ben’s near post shot was saved by Donnarumma.

The home side would get the chance to level from the spot though as Romagnoli was penalised for a handball that he can have no complaints about as the ball struck his outstretched arm, and Kanga made no mistake from 12 yards beating Donnarumma despite the fact he dived the right way.

However, Milan would get a spot kick of their own on the hour mark as Tonali’s through ball to Theo Hernandez saw the left-back clipped just as he was about to gather his touch. Theo was allowed to take the penalty and he made no mistake sending Borjan the wrong way.

💪 No mistake from the spot from @TheoHernandez.pic.twitter.com/69qnneCBBC

Red Star’s task was made a lot more difficult with just less than 15 minutes to go as Rodic was given his second yellow card for shoving Kalulu over as he attempted to get on the end of a ball over the top.

A change followed for Milan as Diogo Dalot came on in place of Theo Hernandez in the left-back position. Another substitution came as Mandzukic came off after a tiresome shift, with Hakan Calhanoglu his replacement.

Calhanoglu almost made an instant impact as his cross found the head of Meite, forcing Borjan into a nice save. From the resulting corner Dalot failed to direct his header on target.

The final chance of the game would be what earned the hosts a draw. A corner from Milan’s left side somehow looped and nestled inside the far post off the back of Pavkov’s head as the Rossoneri were unable to see out injury time against ten men.