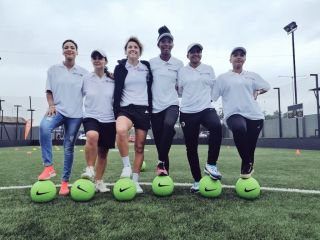 More specifically, they are in Refiloe’s hometown of Soweto to promote a football clinic that will help young, aspiring girls who want to be footballers, develop the necessary skills they’ll need in order to achieve their dreams.

The project is the brainchild of Refiloe herself, as the training camps are are apart of a charitable initiative that she founded called the Refiloe Jane Foundation.

You can follow the progress of the initiative through the Twitter hashtag that has been specifically created for it, which is called the #RJFClinics.

Not all heros wear capes, others just stand together to pull other women up as they rise. Thank you, Valentina Giacinti my captain at @acmilan for coming to my home in South Africa to Support my initiative #RJFClinics @refiloejanefou1 @BoipeloSporting @Banyana_Banyana pic.twitter.com/gTDqi8Wdix

It’s been a banner year for the women of Milan, as they finished their debut season in Serie A in third place. They are currently vying for a top-two finish and a place in next year’s Champions League, during the current season of Serie A Femminile.

The Milan Women will return back from their winter break and resume play on January 12th, 2020. They’ll take on Serie A debutantes Empoli then, in a game that will mark the end of the first half of the season, before the second stage of the season begins on January 18th.