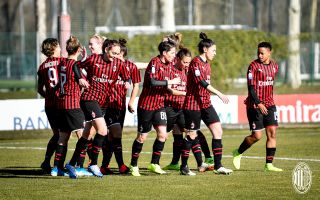 Milan never do things the easy way, do they? Indeed, the Rossonere, just like their male counterparts, often seem to end up doing the complete opposite.

The AC Milan Women apparently aren’t ones to break tradition, so they insisted on staying true to form and making us sweat throughout this game. But in the end, it was all worth it.

The match itself started out just fine, as the deadlock was broken after 46 seconds by none other than our intrepid captain, Valentina Giacinti.

The Rossonere seemed to be in cruise control for about 17 minutes, that is until the Bari nation attacked. Aina Torres tucked in Shona Zammit’s cross underneath the bar and the two teams were suddenly level.

It was then that Milan does the thing that they usually do against small teams, which is to struggle against them. Or at least, they would have appeared to do so on the surface.

Half-time came, and Coach Ganz must have given them quite the pep talk because the Rossonere came storming out of the gate after the interval.

Five minutes into the second half and once again, it was Giacinti who managed to find the back of the net. That goal would be the spark of electricity that would jumpstart the Rossonere’s beating heart and bring them back to life.

Giacinti’s goal was soon followed by one by Nora Heroum (53′). Not wanting to be left out of the fun, midfielder Refiloe Jane would add to the total with an absolute pearler of a goal.

Another beauty from Refiloe Jane today as she scored her second for AC Milan, a lovely strike from outside the box…

However, Bari worked hard to ensure that Milan wouldn’t win quite so easily.

At the 77th minute, Bari’s Carp would go fishing for a goal and cut Milan’s lead down to a two-goal deficit (4-2). Fortunately for Milan however, new signing Thorvaldsdottir would fire a thunderbolt into the back of the net at the 78th minute.

Thor’s goal would extend Milan’s goal tally to five, and not wanting to be left out of the fun, Captain Giacinti would cap off her fine performance with a goal at the 82nd minute.

The goal would allow Giacinti to complete her hat-trick and would be just the cushion needed to ensure a victory.

Bari would pull yet another one back at the 88th minute, but it wouldn’t be enough to overturn the goal deficit. In the end, Milan won the game 6-3.

Nothing worth having comes easy

Despite the hefty scoreline, Milan actually struggled during this game. There were many defensive errors, and these errors can be chalked down to a variety of things.

First and foremost, is that Maurizio Ganz chose to continue his experiment with the line-up. Once again, he fielded Nora Heroum as a fullback, only this time, he placed her on the right instead of the left. This was done to accommodate Milan’s starting left-back, Linda Tucceri Cimini, whose presence was sorely missed for much of the last game.

The wacky science experiment seems to gone better this time around, as the Rossonere didn’t struggle nearly as much to create goals. The fact that they scored six of them would attest to this.

However, where Milan suffered the most was in defense. This was again, largely due to the make-shift line-up. Nora Heroum traditionally plays as a midfielder and has only been in the fullback position for less than one week. This isn’t enough time to create the type of cohesion needed to create a strong, impenetrable defense.

As a result of this Milan – who statistically have the third strongest defense in the league – let three goals past them. Adding to this is the fact that Ganz chose to start second-string goalkeeper Alessia Piazza in place of first-choice keeper, Mária Korenčiová.

Alessia is still young and still has a long way to go before she can become a top goalkeeper. This was quite evident during the match, when she appeared nervous and tentative at times. She was also partially culpable for Bari’s second goal, due to not positioning herself properly in order to stop Carp from scoring.

It’s perhaps a little too harsh to single her out though. She’s still young and has a lot of time to learn, and to get better. However, the fact that Milan took in three goals and that Bari came dangerously close to scoring at the 65th and 66th minutes highlights the need to work on a few, glaring issues.

The team needs to become more fit in order to be able to keep up the intensity for a full 90 minutes and to prevent situations like this from happening frequently. This has sadly, been a recurring theme for them the past few games, and it’s something they definitely need to work on.

Here’s to hoping that they will, in fact, do so.

It’s worth remembering that Milan’s midweek encounter against Pink Bari was to make-up a match that had previously been postponed.

Up next for them will be another derby with Inter on Sunday. This will be the fourth meeting between the two sides, and Milan has won all three previous encounters.

The last time they played Inter was back in December, during yet another midweek encounter, only this time, it was for the Coppa Italia. Milan handily won that match by a score of 4-1. It should be noted that Milan had the fresher legs then, as that was the week their match with Bari had been postponed.

This week, the two teams will go into the derby with the situations reversed.

Physical fitness has, unfortunately, been an issue for the Milan Women as oftentimes, they looked gassed after playing intense matches.

However, one can take comfort in knowing that a few of Milan’s key players have been rested. Most notably, starting centre-back Stine Hovland, who was replaced by Francesca Vitale, did not play the past two games, and stalwart forward Deborah Salvatori Rinaldi has been out of commission since December. She seems to have fully recovered from her case of plantar fasciitis though, and is fit enough to start playing again.

The hope is that both of them will have fresh legs and be ready and raring to go for this Sunday, while the rest of the Milan squad will be ready alongside them.

The game against Inter will be played this Sunday, February 02, at 12:30pm CET.

Here’s to hoping they can draw inspiration from this match and pull off yet another fantastic performance. Let’s make it three for three, and pull off another victory then.