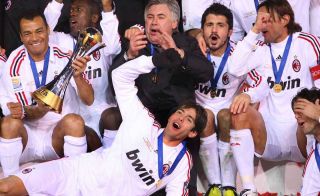 Report: Ancelotti rejected advances of Inter due to love and respect for Milan

Carlo Ancelotti turned down the possibility to manage Inter out of love and respect for his beloved AC Milan, according to a report.

Antonio Conte decided to leave Inter at the end of the season after leading the Nerazzurri to the Scudetto due to a lack of guarantees from the ownership and the financial problems that they are currently experiencing.

In the end, Inter have appointed Simone Inzaghi from Lazio to replace Conte, but a number of other managerial targets were mentioned such as Massimiliano Allegri. According to AS, when the Allegri option faded, the Inter management reached out to Carlo Ancelotti.

However, the now coach of Real Madrid decisively rejected the offer from Inter because of his infinite faith for the Rossoneri colours. The report adds that Ancelotti would never have accepted to coach the direct rival of his Milan a club he won everything with and that made him a top manager.