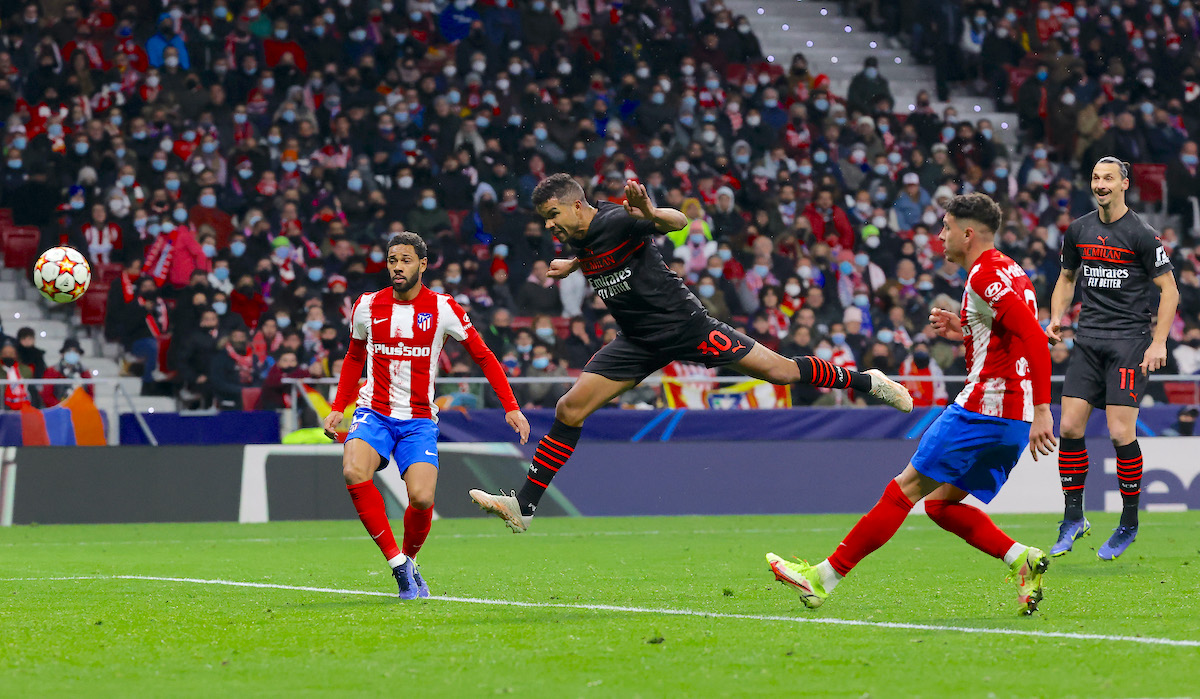 AC Milan kept their Champions League hopes alive with a sensational 1-0 victory against Atletico Madrid courtesy of a goal inside the last five minutes.

Milan came into the game knowing that it was a do-or-die situation; either they had to record their first victory of the group stage or they would be eliminated, and while they had to wait until the closing stages to get the goal their pressure deserved it did eventually arrive.

It came from an unlikely source as well, as a fantastic cross from Franck Kessie down the left wing perfectly met the head of substitute Junior Messias, who headed past a helpless Oblak to send the travelling fans into delirium.

Two second half goals from Liverpool at Anfield meant that the Rossoneri got the result they needed to help keep them alive, and it sets up another must-win game in matchday six against Jurgen Klopp’s men at San Siro.

Head coach Stefano Pioli made three changes from the team that lost for the first time in Serie A on Saturday night with Alessio Romagnoli coming into the back four for Matteo Gabbia, Rade Krunic joining the attacking trident in Rafael Leao’s place and Olivier Giroud preferred over Zlatan Ibrahimovic.

It took just 10 seconds for a first flash point to occur, and it came when Koke chopped Theo Hernandez down as the Frenchman tumbled awkwardly on his knee and took some time to get up.

Inside the third minute Atletico Madrid made an absolutely sensational save to deny Rodrigo De Paul, though he will have been disappointed to look over and see the offside flag raised thus meaning it wasn’t a goal-saving stop so to speak.

Milan began to enjoy a bit more possession after an initial skirmish, and Brahim Diaz will have wanted another attempt at a shot he had from 20 yards out that he dragged wide of the near post having dribbled through three players.

There was a brief moment of panic for Oblak as the Atletico goalkeeper backpeddled to make sure that a Brahim cross drifted over at the far post in the 10th minute.

The game continued to be played at a high pace as Milan pressed up the pitch and forced Diego Simeone’s man into numerous dangerous giveaways, lacking the killer pass to punish them. Oblak did make a save from Kalulu’s header after a late run from the right-back, but it was routine.

Tension began to increase with a few niggling challenges causing anger from both sets of players, culminating just before the half-hour mark when Koke went down claiming he’d been elbowed by Giroud who was booked for what replays showed to be a forearm in the face.

Just over ten minutes before the break Theo Hernandez had a half-chance to open the scoring as a long cross fell to him at the far post, though he couldn’t keep his half-volley down as he flashed it over the bar following a difficult bounce.

The first opportunity of the second half went Milan’s way as Saelemaekers found some space to get a shot away that was straight at Oblak in the end.

As news came through of an opener for Liverpool at Anfield against Porto – something that certainly helped both sides – Giroud became the latest to fire over the bar with an ambitious swinging attempt from just outside the edge of the box.

Just after the 60-minute mark Kjaer had a colossal opportunity to give Milan the lead as he got to a Theo Hernandez free-kick first at the near post and somehow couldn’t direct his header on target.

A quadruple change came from the visiting team not long after that as Tiemoue Bakayoko, Alessandro Florenzi, Junior Messias and Zlatan Ibrahimovic came on with Tonali, Krunic, Kalulu and Giroud going off, all while the latter clutched his hamstring.

Milan fashioned two huge chances to break the deadlock as they twice got in behind down the left side. The first opportunity saw Messias cut the ball back for Bakayoko who sidefooted the ball on target but his shot was met by a desperate block from Savic, and then Saelemaekers fed a pass through to Theo Hernandez who was in shooting range yet failed to bring the ball under control.

Tatarusanu was called into a save inside the final 20 minutes as De Paul volleyed a Griezmann cross straight at him, while up at the other end Florenzi drilled a fierce shot over the bar. Moments later, Ismael Bennacer came on for Brahim Diaz.

Oblak produced a fantastic stop to deny Ibrahimovic who had been put through on goal and the flag did go up on the far side as the ball went out for a corner, though replays showed he was actually onside and a goal would have stood.

With just over three minutes left on the clock, it was Milan who got the goal their pressure deserved. A counter-attack saw Theo feed a ball into Kessie who was playing as a makeshift attacking midfielder at this point, and he stood up an inch-perfect cross where Junior Messias was waiting to head in for his first ever goal for the club.

There seemed to be a huge chance to Ibra to seal the three points when a Florenzi shot was parried into the Swede’s path and he lifted the ball over Oblak but his effort was cleared off the line. At the other end, Cunha wasted a huge chance for Atletico to level as he diverted a cross wide at the near post.

That would be the final chance of the game as late penalty appeals were waived away when Correa took a tumble, as Pioli’s resilient Rossoneri live to fight another day.