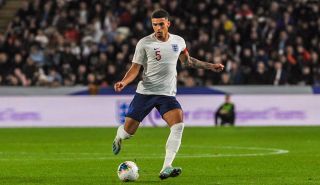 Ben Godfrey has set his sights on a move to AC Milan in the summer transfer window despite interest from Manchester United, a report claims.

The Rossoneri are understood to be keen on adding a young centre-back to their ranks this summer who can grow alongside Alessio Romagnoli and Simon Kjaer, and Sky reported earlier today that Godfrey appears to be a serious option.

The outlet claims that Milan met with Godfrey’s representatives before the 3-0 Serie A win over Cagliari on Saturday night, and that Norwich value the player at £30m, which is around €33m.

According to Calciomercato.it, intermediaries are in talks with both Milan and Napoli over a potential move to Serie A for the England U21 captain.

However, Manchester United are now also in the running as club legend Rio Ferdinand is part of the agency that manages the player, and has asked for information.

Bayer Leverkusen are also keen, but the player has his heart set on a move to the Rossoneri, persuaded by his idol Paolo Maldini.

It will be necessary to convince Norwich to lower their €30m demands before a move can take place, however.