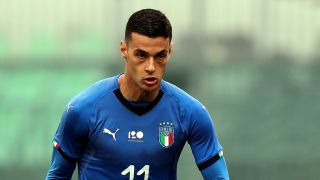 AC Milan have a strong interest in signing Celtic stat Odsonne Edouard to reinforce the attacking department, according to a report.

There has been an abundance of speculation in the media that Milan will move to try and sign a deputy to Zlatan Ibrahimovic who could eventually be his long-term replacement if things go well.

According to the Daily Record in Scotland – which cites inews24 – Milan have an interest in Edouard to become Ibrahimovic’s deputy.

He is a player that Milan know well because he recently played against the Rossoneri in the Europa League, scoring the second goal at San Siro for his side before they eventually lost 4-2.

Edouard grew up in PSG’s youth academy but exploded in Scotland during the 2017-18 season, and so far with Celtic he has scored 68 goals in 132 games.

The report does go on to mention that Gianluca Scamacca of Sassuolo (on loan at Genoa) is also a possibility but he would cost around €25m compared to the €33m that Edouard would cost.

The final track leads to an audacious move for Erling Haaland, but there are a number of top clubs on him and he would cost €75m.