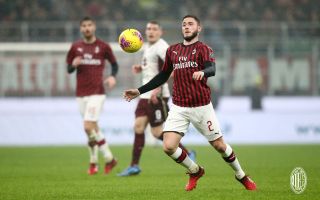 A new suitor has emerged for AC Milan full-back Davide Calabria who continues to be linked with a summer exit, according to a report.

Serie A rivals Fiorentina and LaLiga side Sevilla have both been credited with interest in a move for Calabria over the last few months particularly in the January window, but neither appeared to make a concrete move.

According to il Resto del Carlino (via Calciomercato.com), Sinisa Mihajlovic’s Bologna have become the latest team to join the race to land the 23-year-old Milan Primavera product.

Mihajlovic of course coached Calabria during his time as Milan boss in the 2015-16 season and gave him his first Serie A start in September 2015, then using him regularly over the established Ignazio Abate.