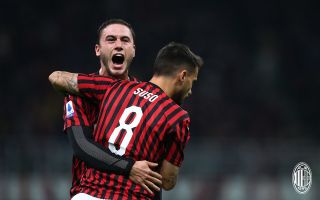 AC Milan could sell full-back Davide Calabria in the summer window with at least four clubs interested in signing him, a report claims.

It has been a season to forget for Calabria after an excellent year with Gennaro Gattuso, as the 23-year-old has struggled to recover from his mistakes and the two red cards he received earlier in the campaign.

Andrea Conti has become the starter at right-back despite not always managing to provide decent performances, while the back-up spot Calabria seemed certain of holding onto is now being challenged by Alexis Saelemaekers, who arrived from Anderlecht on deadline day.

According to MilanLive, if Calabria does find himself third in the pecking order then his time at Milan is almost certainly over. They add that the player is liked by Genoa, given that they may have to sell Paolo Ghiglione, but also possibly Fiorentina.

However, the most viable track to date is Lille, with the Ligue 1 side ready to rival Sevilla for the purchase of the Milan Primavera product. A starting price of €13-15m has been set by the Rossoneri – a figure that would represent a pure capital gain, something crucial for the balance sheets.