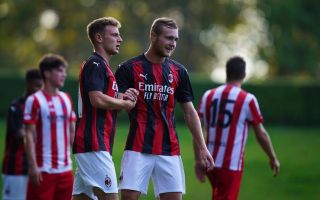 Milan aren’t just focused on signings this transfer window, but also renewals. This has been a hot topic as of late, especially in the first team, and the Rossoneri have now managed to tie down one of their academy products.

According to Alessandro Jacobone, they have reached an agreement with Luca Stanga for a contract renewal until 2023. The 18-year-old, who can play both as a right-back and centre-back, featured in some of Milan’s friendlies this pre-season.

He came on against Vicenza and scored the final goal of the game, assisted by the new signing Brahim Diaz. A few Serie B clubs, such as Entella, and four clubs from Serie C had expressed their interest in Stanga as of late.

However, the defender will remain with Milan’s Primavera side. This could also mean that Pierre Kalulu could continue with the first team a bit more, depending on Stanga’s position this upcoming season.

READ MORE: Banners put out ahead of Milan’s arrival – ‘We put pineapple on our pizza’