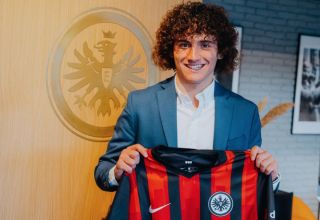 Bundesliga side Eintracht Frankfurt have beaten AC Milan and several other teams in the race for Valencia youth starlet Fabio Blanco.

Blanco first joined Valencia’s youth academy in 2019 and a big factor in his decision to leave after just two years, as per CaughtOffside, was that there were no immediate plans to promote him to the first team. It quickly became apparent that the side would face a fight to keep hold of one of Europe’s most exciting prospects and as a number of interested clubs began to gather.

The report mentions that Blanco was courted by several top European teams, including Milan, Barcelona, Real Madrid and Juventus, plus Real Sociedad, PSV Eindhoven, Marseille and Borussia Monchengladbach. However, the teenager chose Eintracht Frankfurt in the end as their director Ben Manga successfully managed to convince Blanco and his family that the Eintracht project is the right one for him.

“Eintracht Frankfurt are hopeful they can emulate Borussia Dortmund’s philosophy of signing younger talents and developing them into world-beaters,” as per the report.