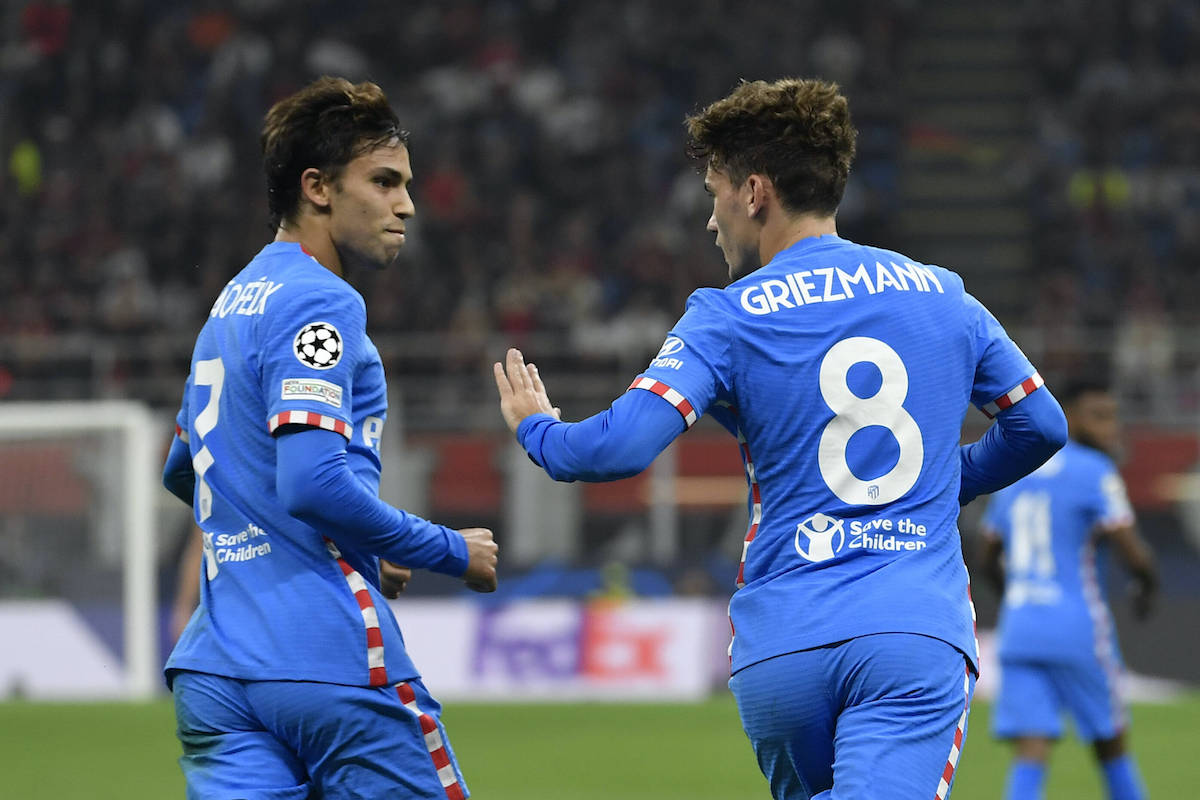 AC Milan showed tremendous spirit to hang on for as long as they did with 10 men, but ultimately succumbed a lead to Atletico Madrid in the closing stages.

Milan started the game like a team who were possessed and took a deserved lead inside the first half with a precise strike into the bottom corner, with the Rossoneri swarming the away side every time they got the ball.

The turning point in the game came before the half time whistle though as Franck Kessie saw red for a second yellow card, though questions have to be asked of the referee’s decision making.

The equaliser came through substitute Antoine Griezmann after waves of attacks from the LaLiga champions with what was an excellent volley, but the referee was again the centre of attention for awarding a late handball.

After a lengthy VAR check the penalty decision stood and Luis Suarez tucked it away to ensure Milan remain on zero points and the away team went back to the Spanish capital with all three points.

Head coach Stefano Pioli made four changes to the starting line-up from the win over Spezia as Davide Calabria, Ismael Bennacer, Brahim Diaz and Rafael Leao came back into the starting XI.

The home side seemed to ride the atmosphere that a raucous crowd of almost 40,000 were providing, pressing high up the field as challenges flew in from both teams making for an exciting but scrappy opening.

There was almost an opening for Milan inside the eighth minute when a sloppy giveaway from Atletico Madrid was seized by Leao, who released a ball in behind the defence that Rebic was about to get onto before a vital clearance from Oblak.

The visiting side had half appeals for a penalty when a ball was stabbed through onto the arm of Tomori, but his arms were down by his side and a VAR check was concluded quickly.

Early intensity was certainly the order for the day, and in the 12th minute Tomori became the latest to fire on when Milan won the ball back half way in the Atleti half though his effort sailed wide from 30 yards.

Brahim Diaz will have hoped to have done better a few minutes later when he seized possession inside the Atletico half before dribbling forward and shooting straight into the arms of Oblak with options to the left and right.

With just shy of 20 minutes on the clock, Milan squandered a huge chance to go 1-0 up as Rebic was put through on goal after a fantastic through ball from Brahim Diaz, but Oblak produced a fantastic save with his leg to deny the Croatian.

From the resulting corner however, it would be 1-0 to the Rossoneri as they got the opener their early pressure deserved. Brahim did fantastically to hang onto the ball before squaring to Leao in space, who set himself before sweeping a sweet shot with his right foot into the bottom corner.

There was a game changing moment just before the half-hour mark as Franck Kessie picked up his second yellow card in quick succession after what looked like another very harsh decision from Cüneyt Çakır the referee.

Pioli responded with a change a few minutes later as Rebic was sacrificed for Sandro Tonali in an attempt to shore up the midfield department after Kessie’s dismissal, with the Croatian forward also on a booking for protesting the red.

The crossbar was rattled eight minutes from the break with an absolutely incredible overhead kick from Leao when he wasup against two men inside the box, though the offside flag ensured that any awe would have been cut short.

Diego Simeone responded with a change of his own when Joao Felix game of for Kieran Trippier, who had taken a bit of a kicking in the first 40 minutes of action.

Atletico had the final chance of the first half as a cross from the right wing was hooked towards goal by Luis Suarez, with the Uruguay international getting a sweet connection but diverting it wide with Maignan rooted.

Simeone looked to make the most of the man advantage by making a double change at the break, with Rodrigo De Paul and Renan Lodi coming on for Carrasco and Hermoso respectively.

The second half started as though it was going to be a game of defence versus attack, and Luis Suarez wasted a huge chance to level the game eight minutes in as he planted a free header from around the penalty spot wide of the post when it seemed harder to miss the net.

Not long before the hour mark Pioli made a double change to try and take a bit more of the sting out of the game, with Leao and Brahim Diaz making way for Olivier Giroud and Fode Ballo-Toure as the switch to a back six took hold.

A couple of changes followed from Los Rojiblancos as Antoine Griezmann and Thomas Lemar entered the fold with Koke and Kondogbia going off, as the latter had got himself into some trouble with the referee, being cautioned.

Atleti’s approached seemed to be one based around keeping possession on the edge of Milan’s box and hoping for some openings, and De Paul should have done better when he wound up to shot from 20 yards out, instead hitting the fans in the first tier.

There was yet another flash point in what was turning into a very aggressive and ill-natured game when Suarez tried to reach what he saw as a loose ball inside the box and dived for it knee-first, catching Maignan in the neck which provoked a very unhappy response.

Lemar tested Maignan inside the final 15 minutes as he locked onto the target and fired with his second touch from just outside the box, but he was able to parry fairly comfortably in the end.

With legs clearly tiring as the game wore on, Pioli made a final double change with 10 minutes to go as Saelemaekers and Bennacer came off for Pierre Kalulu and Alessandro Florenzi.

With six minutes left, the sucker punch came from Atletico Madrid and it came through the substitute Griezmann. A ball over to the far post was headed back into a dangerous area by Lodi and volleyed in at the near post with a superb finish as Maignan was mounted to the spot.

Milan found a burst of energy from somewhere and fashioned another chance with ten men as Florenzo charged onto a loose ball and sliced an effort towards the far corner that narrowly missed. It was the man on loan from Roma who found the roof of the net not long after, this time from 40 yards, but Oblak was never in trouble.

In the first of six minutes added on at the end of the game, Maignan produced a fantastic save to stop a turn and volley from Joao Feix.

The referee was again the centre of attention for awarding a late handball and a penalty to Atleti in the final seconds. After a lengthy VAR check that appeared to show Lemar push the ball into Kalulu with his arm if anything, the call stood and Suarez won the game.