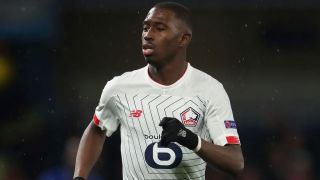 AC Milan had struck a deal with Lille to sign midfielder Boubakary Soumaré however the move will seemingly now not go through, it is claimed.

The Rossoneri saw him as an alternative to Tiemoué Bakayoko in midfield department, as he has similar characteristics and had been made available by Lille.

Journalist Nicolò Schira on his official Twitter accounts reveals an interesting background regarding Soumaré. The 21-year-old was close to joining Milan in early September, when Paolo Maldini and Lille had reached an agreement over a transfer also thanks to the intermediation of agent Oscar Damiani.

Despite this agreement between the two clubs, the player chose to refuse the move to Italy because he wants to go play in the Premier League. Arsenal and Manchester United are believed to be on his trail, with a value of €30m+.