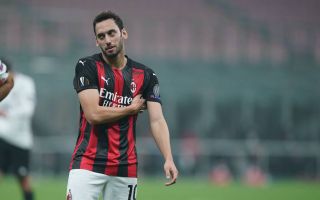 AC Milan are confident of reaching an agreement regarding the renewal of playmaker Hakan Calhanoglu, according to a report.

Calhanoglu’s current contract is set to expire in June 2021 and there has been nothing to suggest that a renewal is imminent, despite reports in the Italian media that negotiations are underway.

In fact, the latest update from SportMediaset (via MilanLive) claimed that there is still a vast difference between what Milan are willing to offer and what the playmaker is demanding to renew his deal of around €1.5m net.

They added that Manchester United and Napoli are among the clubs to have taken not of the situation, while Arsenal, Juventus and Inter have all also been linked.

According to Nicolo Schira on Twitter, Milan are now in advanced talks to extend Calhanoglu’s contract until 2024, in what would be a three-year extension of his current deal.

He adds that the Turkey international has asked for €5m net per season as his new wage. Milan offered €3.5m, but and are confident that they will reach an agreement.