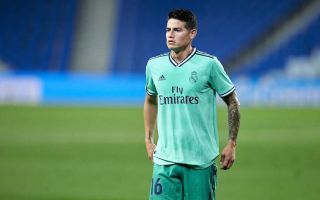 AC Milan have made an offer for James Rodriguez ahead of the summer transfer window, according to a report.

Rodriguez has been strongly linked with an exit from the Bernabeu this summer as he has made just 14 appearances this season. Eight of those have come on LaLiga.

According to what is being reported by TV station El Chiringuito (via BeSoccer), the Rossoneri have put forward an offer to Real Madrid for the Colombia international.

However, they are not alone in their pursuit, as Benfica as well as Manchester United and Inter have also put bids on the table for the former Bayern Munich man.

Madrid would not object to his ext exit and would be willing to let him leave for just €15million euros, a rather derisory amount when compared with the €80million they paid to sign him from Monaco back in 2014.

James has quite a high net salary though, of around €8million per year.