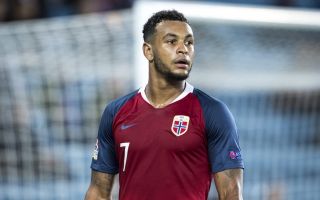 AC Milan have launched a shock bid to sign Bournemouth striker Joshua King this summer, according to a report from Football Insider.

It has been speculated by various media outlets that Milan could be in the market for a centre-forward willing to be the deputy to Zlatan Ibrahimovic, who looks set to renew his contract and stay for another year.

Football Insider claim that Milan are ‘extremely keen’ and are preparing an approach for Josh King, a 28-year-old Norway international who scored six Premier League goals last season in 26 appearances as Bournemouth were relegated.

King has just one year left on his contract at the Vitality Stadium and looks set to leave the club following their relegation, with Spurs and Manchester United also credited with interest in the player.

The report even adds that United saw a bid worth £25million (just short of €30m) rejected for the player in January before turning to Odion Ighale.