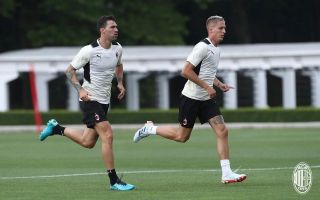 Andrea Conti is one of the players who continues to be linked with a Milan exit and a Serie A side could come forward for him in January, a report claims.

According to SampNews24, Sampdoria could sell Bartosz Bereszynski once the transfer window reopens as he is being targeted by José Mourinho’s Roma. To replace the Polish full-back, Massimo Ferrero could make an attempt for one of three players who are considered to be low-cost solutions.

The first player is Davide Santon, now at Roma, while Lorenzo De Silvestri of Bologna is on the list. Andrea Conti is another profile in the viewfinder and already this summer the management of Sampdoria made an attempt to buy the Rossoneri defender.

Conti has not played a single minute this season and seems to have been almost completely frozen out for the time being. He had a loan spell at Parma in the second half of last season but they chose not to use their option to buy.