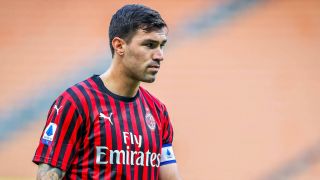 Two LaLiga clubs are interested in signing Alessio Romagnoli from Milan as the situation regarding his renewal seems precarious, a report claims.

According to Calciomercato.com, Romagnoli’s future is a matter that the management want to have resolved within a few months given that his contract deadline expires in 2022. His future is increasingly uncertain as his starting spot is no longer solid after the exploits of Fikayo Tomori. Raiola’s goal is a pay rise from the current salary of €3.5m net per season, but the stance of the club is a cap of €4m net per year.

That is why his future may be far from Milan, and Barcelona are thinking of a move for the Italy international as they want a left-sided centre-back due to concerns over Umtiti and Lenglet. The valuation of Milan, six years after signing him and with his transfer fee completely amortised, is €20m.

Meanwhile, Alessandro Jacobone is reporting that Atletico Madrid have also made enquiries about the 26-year-old with agent Raiola in recent days. He has been on their wish list for some time, and now the Rojiblancos directors want to understand if there is room to make an offer.