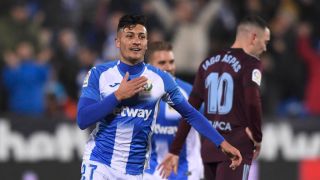 Reports: Milan hold talks with Real Madrid over another forward who could join with Brahim

It appears AC Milan are in the market to land not just one but two attacking players from Real Madrid this summer, a report claims.

According to Calciomercato.com, the link between Milan and Real Madrid has always been very strong and now it could once again bear fruit.

In recent days the Rossoneri management had contact with the Real Madrid board over Brahim Diaz, a 21-year-old attacking midfielder who is good with both feet and can even play out wide.

However, the discussions did not stop there as Milan are also keen on signing Oscar Rodriguez from Los Blancos. He spent last season on loan at Leganés and scored nine goals in 30 LaLiga appearances, but now wants to make the leap to a bigger club.

According to the Madrid newspaper AS, the Rossoneri have initiated contacts with the player’s entourage to probe the situation. For his part, he would accept a move to Serie A.

Maldini and Massara are now moving and try to beat the competition of Granada and some Bundesliga clubs.