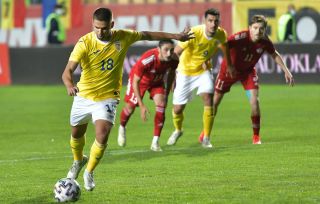 AC Milan are interested in signing midfielder Razvan Marin who is currently on loan at Cagliari from Ajax, according to a report.

This morning’s edition of Tuttosport (via MilanNews) writes that Cagliari will sign him from Ajax for €10m as per the terms of the option to buy that they inserted into the loan deal, but could sell him soon after for a quick profit.

As mentioned, the player is of interest to the Rossoneri and yesterday there was a first meeting with the management of the Sardinian club to discuss the chances of signing Marin. In the next few days the discussions will go on to understand the feasibility of the operation.

Gianluca Di Marzio told Calciomercato L’Originale on Sky (via PianetaMilan) last night that Paolo Maldini and Frederic Massara met with Cagliari over Marin and discovered that they have already rejected an offer from Lyon worth €15m, a testimony of how difficult it will be to bring the Romanian to the club.

READ MORE: Joy, disappointment and now revenge for Calabria – he wants to send a message to Mancini