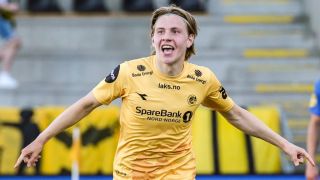 AC Milan want to close a deal as soon as possible for Norwegian sensation Jens Petter Hauge as the nature of their competition has become apparent.

According to il Corriere dello Sport on Monday (via MilanNews), Milan are insisting on signing Hauge and contacts with Bodo/Glimt are expected on Monday to try and close the deal, given the interest of Manchester United, RB Leipzig and Red Bull Salzburg.

The management therefore want to accelerate the operation to beat the competition, while the player has already given the go-ahead for the move to take place, but a final effort is needed.

Meanwhile, Tuttosport (via MilanLive) agree that the Rossoneri could close the negotiations with Bodo/Glimt for the 20-year-old winger on Monday by offering a figure around €4-5m.

Milan are thinking whether to bring him to Italy immediately or leave him in Norway until the end of the season, even if his comments earlier today suggest he wants to make the move immediately.