Reports: PSG and Man City have a keen eye on Milan star – €50m release clause not a problem

Paris Saint-Germain and Manchester City are both keen on signing AC Milan midfielder Ismael Bennacer, according to a report.

Bennacer has established himself as one of Milan’s most important players, forming an exceptional double pivot with Franck Kessie that has been a huge part of the resurgence over the past few months.

MilanNews recently reported that Guardiola and Manchester City are interested in Bennacer, highly esteemed by the Spanish coach. However, signing the Algeria international from Milan will not be easy as there is a €50million release clause in his contract.

According to the latest from SportWitness though, such an amount “shouldn’t be an issue to either Manchester City” or in fact to PSG, who are both eyeing the former Empoli star.

They also cite a report from il Corriere dello Sport which claims that it is “difficult, for the moment, to snatch him from Milan”, but that if results were to worsen then things could change very quickly.

Bennacer is “always willing to stay”, but SportWitness suggest that the thought of winning trophies either in France or England could be a big influence. 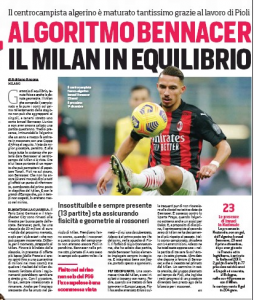