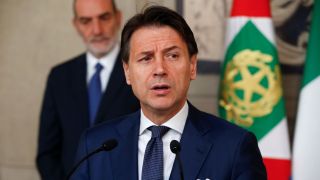 Italian Prime Minister Giuseppe Conte could announce the cancellation of the 2019-20 Serie A season in the next week, a report claims.

Teams in the regions of Emilia-Romagna, Lazio, Campania and Sardinia are set to return to training within the next few days, but according to Sunday’s editions of La Repubblica and La Gazzetta dello Sport (via MilanNews), the completion of the Serie A season is by no means certain.

The daily death toll fell to 192 on Saturday, the lowest figure since March 14, but there are fears that the precedent has already been set as Ligue 1 has been cancelled, as have the Dutch Eredivisie and Belgian Juliper League.

On Wednesday, Conte will with the technical committee and Minister for Sport Vincenzo Spadafora to discuss the options moving forward, and it is not ruled out that he could announce that the season cannot be completed.

If Serie A were to resume it is believed it would be on either June 14 or 21, and if it is the latter then the Coppa Italia semi-finals would either be scrapped or postponed until next season.

The Europa League spot that would have gone to the Coppa Italia winners would instead go to a team in the top seven of Serie A.