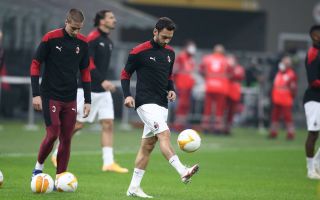 Sources in Germany believe that Manchester United and Inter are both keen on a move for AC Milan playmaker Hakan Calhanoglu, a report claims.

Calhanoglu’s current contract is set to expire in June 2021 and there has been nothing to suggest that a renewal is imminent, despite reports in the Italian media that negotiations are underway.

SportMediaset (via MilanLive) claimed that there is still a vast difference between what Milan are willing to offer and what the playmaker is demanding to renew his deal of around €1.5m net, while Calciomercato.com linked Arsenal, Juventus and Inter with the Turkey international.

Now, today’s edition of La Repubblica (via MilanNews) reports an indiscretion they have reportedly receive from Germany on Calhanoglu.

They claim that Manchester United are monitoring the situation surrounding the former Leverkusen man and are admirers of the player, while Milan’s city rivals Inter are also big fans of Calhanoglu.