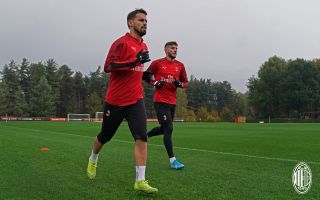 Repubblica: Value of AC Milan forward has plummeted as exit rumours rumble on

The value of AC Milan winger Suso has drastically decreased in light of his recent struggles for form, according to a report.

The Spaniard has amassed just one goal and two assists so far this season, failing to replicate his usual levels of performance and relinquishing his title as the Rossoneri’s most creative player.

Suso put in arguably his worst performance of the season on Monday in the 0-0 draw with Sampdoria, scoring a 4/10 in our player ratings.

Wednesday’s edition of Tuttosport even claimed that the Milan hierarchy have made the decision to sell the 26-year-old this month, and that Stefano Pioli could ironically switch to a 4-3-1-2 in order to adjust.

According to La Repubblica on Wednesday though – as cited by MilanNews.it – Paolo Maldini and Zvonomir Boban would not be able to get close to his €38m release clause.

Instead, the paper claims that the former Liverpool man is not worth more than €20million at present, likely due to a combination of his poor performances and seemingly a lack of potential suitors.