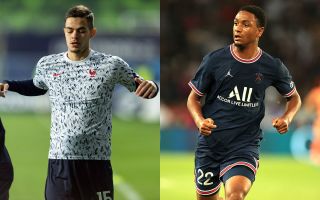 The January window is now just a few days away and as a result, the rumours are starting to pile up with regards to AC Milan’s strategy. The Rossoneri want to bring in a centre-back, that seems to be the only certainty.

Simon Kjaer wíll miss the rest of the season due to a serious injury and Milan want to bring in a centre-back to cover for his absence. One of the names that have been linked with the club recently is Abdou Diallo.

According to RMC Sport, Paris Saint-Germain have offered the defender to Milan but the latter aren’t willing to spend any money next month. They are looking for a loan, even if it means adding an option, but it will be difficult to convince the French side of this.

In addition to Diallo, Milan have also been linked a lot with Romain Faivre, but for another position. The right-winger would be a good addition but the Rossoneri are just evaluating a summer attempt for now. Brest are asking for €15m to sell their star.

READ MORE: Milan want to rely on Rebic as second half beckons – his importance is clear