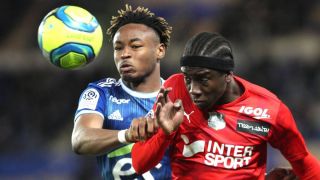 RC Strasbourg ended up resisting a deadline day onslaught from AC Milan who were determined to sign Mohamed Simakan, a report claims.

Going into deadline day, were expected to sign centre-back before the window closes at 20:00 CEST given that they currently have only two healthy players in that particular department.

So many targets were linked, including the likes of Celtic’s Kristoffer Ajer, Fiorentina’s Nikola Milenkovic and Saint-Etienne’s Wesley Fofana. None arrived as all three were ultimately deemed not worthy of the investment, or the money simply wasn’t there.

Then even on deadline day there were three irons in the fire: Schalke’s Ozan Kabak, Chelsea’s Antonio Rudiger and Strasbourg’s Mohamed Simakan, but none arrived.

According to Loic Tanzi of RMC Sport, Strasbourg resisted a late pursuit of Simakan by Milan who went as far as sending a private plane to Strasbourg while waiting to find an agreement.

In the end though, the asking price of the Ligue 1 club was not met and therefore the 20-year-old will remain.