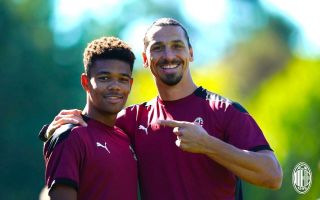 AC Milan striker Emil Roback has revealed that he preferred a move to Arsenal over joining the Rossoneri, before eventually accepting a move to Italy.

It was confirmed at the time by Hammarby’s sporting director that the Rossoneri beat competition from Arsenal to land his signature.

“Arsenal contacted us and we know of their interest. Emil met them but there are also other clubs. Several big clubs in Europe have looked for Emil, we have agreed with two clubs, so it was Emil who made the final choice,” he said.

As per MilanNews, the amount paid to bring him to the Rossoneri was €1.5m, a significant investment for a very young player who is highly rated.

Ibrahimovic – who trained with Roback at Hammarby during the spring – branded him ‘the future’ during a recent Instagram post.

Roback spoke to Swedish newspaper Sportexpressen about Milan’s pursuit of him and offered some intriguing background.

“Milan had known about me before and had seen me in some international matches with the youth national team, I think a year ago,” he said.

“I told my agent then that I did not want to go to Milan. Then I knew that also Arsenal and also Bayern Munich were interested, especially Arsenal wanted to invest in me.

“Things went better and better for me and I did well with Hammarby. Milan continued to track me. But I kept saying that I was not going to Milan because I was still set for a move to England and Arsenal then.

“At the end, I chose Milan. I went with my gut feeling, even though I knew that Arsenal agreed a deal with Hammarby. Once I got there [to Milan], everything was amazing. I visited Milanello and the facility is awesome.

“I got to meet some people in the club there at Milanello and then I talked a bit with Zlatan. Of course it is a guarantee for me to have him here at the club, he is Swedish and knows how everything works.

“Ibrahimovic knows exactly what it’s like for me, he went through all this once upon a time when he was young. He told me that it will be hard in the beginning but that I have to be patient.

“How did I feel in my first training session with Milan? Of course you would think that I would feel shaky and nervous, but I did not. It felt really good and I felt safe somehow.

“Against Novara I got an assist and we won 4-2. It felt good. I was given instructions on how to act in certain situations, but everything was in Italian so I hardly understood anything. It went well anyway. Nobody speaks English here so I just started practicing Italian. It’s hard, but it should work.”

Roback revealed that he has also seen his personal popularity grow as a result of joining Milan.

“I probably had 5,000 followers before [the Novara game] and now I have well over 22,000. Zlatan also posted that picture of us from the training, it was also quite fun,” he said.

“Everything has gone fast as I said, but now I will probably change a little. Play and train with the Primavera team and then train sometimes with the first squad.

“It’s all about how well it goes and how I perform. But I’m taking things one step at a time right now, it’s probably the best thing to do.”

On Ibrahimovic’s extension, he added: “Obviously it was a good thing for me. As I said, his presence gives me security, he also said that I can get in touch with him if there is anything I need. The only bad thing is that we compete for the same position (laughs).”