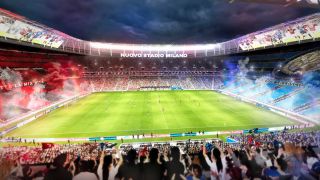 Roj of Manica-Cmr: This is why Milan and Inter should choose our stadium

Massimo Roj – the founder of Progetto CMR and Co-founder of Sportium – has revealed his thoughts on why their new stadium project is better than that of Populous.

Rossoneri president Paolo Scaroni spoke to ANSA and essentially confirmed that the plan is to go full steam ahead with a new stadium.

The two clubs hosted an event last week at the Bovisa Polytechnic in Milano, during which Manica-Cmr and Populous took to the stage to reveal their designs for the ‘new San Siro’.

Scaroni and Inter CEO Alessandro Antonello outlined the key information regarding the brief for the new stadium, before Italian firm Manica showed their renderings, followed by American giants Populous.

Now Massimo Roj, who had a big hand in the Manica-Cmr project, has offered some more insight into why he feels their design should be chosen.

“I am extremely proud and satisfied with the work done with our partners,” he told MilanNews.it.

“It was a team project that was developed in a very short time but which I believe has succeeded in the main objective of transmitting the passion, commitment and dedication that bind us together to the city of Milan and its two historical teams.

“As a Milanese citizen, and a regular visitor to the glorious San Siro since I was very small, this is literally a dream come true!

“Our concept represents a strategic starting point for the entire San Siro district with a view to careful and sustainable urban regeneration.

“Currently the area suffers from a strong detachment with the rest of the urban fabric and the San Siro stadium, although I am one of his greatest admirers and passionate, it really looks like a whale beached on a desolate and paved moor, which becomes even more dramatic when the stadium is not in use.

“Our project has the primary objective of reconstructing the link between this district and the city and it does so through a system of urban park with 3000 trees, extended and open to all, around which develop the typical functions of a neighbourhood, which currently missing, such as neighbourhood shops, restaurants, a hotel, two office buildings, a museum for each team etc.”

One of the plans is to keep the current pitch at San Siro and make it a further attraction, rather than completely demolish everything.

“The project we presented inevitably involves the demolition of the San Siro, but there was a firm and essential point that me, David and all the other Sportium partners have agreed with since we started tracing the first lines of what would later become the concept that you all saw at the presentation last Thursday morning.

“That is to preserve the historical memory of a place that has defined not only the history of football but the identity of an entire city.

“So we decided to keep the pitch of the current stadium, turning it into a large park accessible to all. Because sport must be this: a driving force for inclusion, growth, in the total absence of barriers and obstacles, an experience of fun and entertainment for all!”

What kind of experience will the fan be offered?

“It will be a completely new and immersive way to experience the stadium that starts already outside the plant: once out of the subway, the fan will find himself in front of a green hill and behind him the stadium with the colours of the team playing at home will stand out.

“This emotion that will be further amplified by the more than 16,000 panels that show the faces of the fans and that will be installed on the facades of the stadium, building an even stronger bond with the beating heart of the structure, ie the supporters of the two teams.

” This particular game of the facades that come alive with the reflections of light from the panels with 8 faces of the fans that vibrate in the wind will animate the stadium with its own life, which will always seem dynamic even when it is not in use, like a living organism.

“Entering the stadium, people will be welcomed by a series of arches that recall the Galleria and the arcades of Piazza Duomo and overlooked by commercial activities and the two official stores of Inter and Milan.

“The stands will keep the ‘vertical’ structure of the San Siro but the visibility will be greatly improved: the seats have been designed to optimise the view from every corner of the stadium, while allowing the fans to stay even closer to their teams creating an awesome ‘wall’. effect.

“Even the business seats will be arranged differently than the current stadium, being distributed along all sides, thus having great visibility and offering an even more ‘totalizing’ experience.”

How many seats will be allocated to fans and how many to club business customers?

“It will be possible to extend the number of seats, guaranteeing the necessary flexibility to host special events such as the UEFA finals, having designed ad hoc structural solutions to expand capacity as needed.”

“Naturally we have also thought of the press as an aspect that must necessarily improve with respect to the current condition. Our new stadium includes press areas in compliance with international standards, fully included in the structure.”

Finally, why should Inter and Milan choose your project?

“Because it is a project that intends to bring back to life a neighbourhood that today lies almost abandoned and does so starting from the passion that unites us all: sport!

“Beyond the technical characteristics of our project, what I hope will be most evident is the passion behind it: a project that from the beginning excited us, not just because we are all great football fans but because we are Italians and we are Milanese and as such being able to make our contribution to the new chapter of the Milan to come, strong also due to our deep-rooted knowledge of the territory, is a source of great pride.

“How will we do it? Creating a lively neighbourhood all year round, with an innovative, avant-garde stadium, but above all a stadium that is alive itself even when it is not in use. A sustainable and efficient plant.”