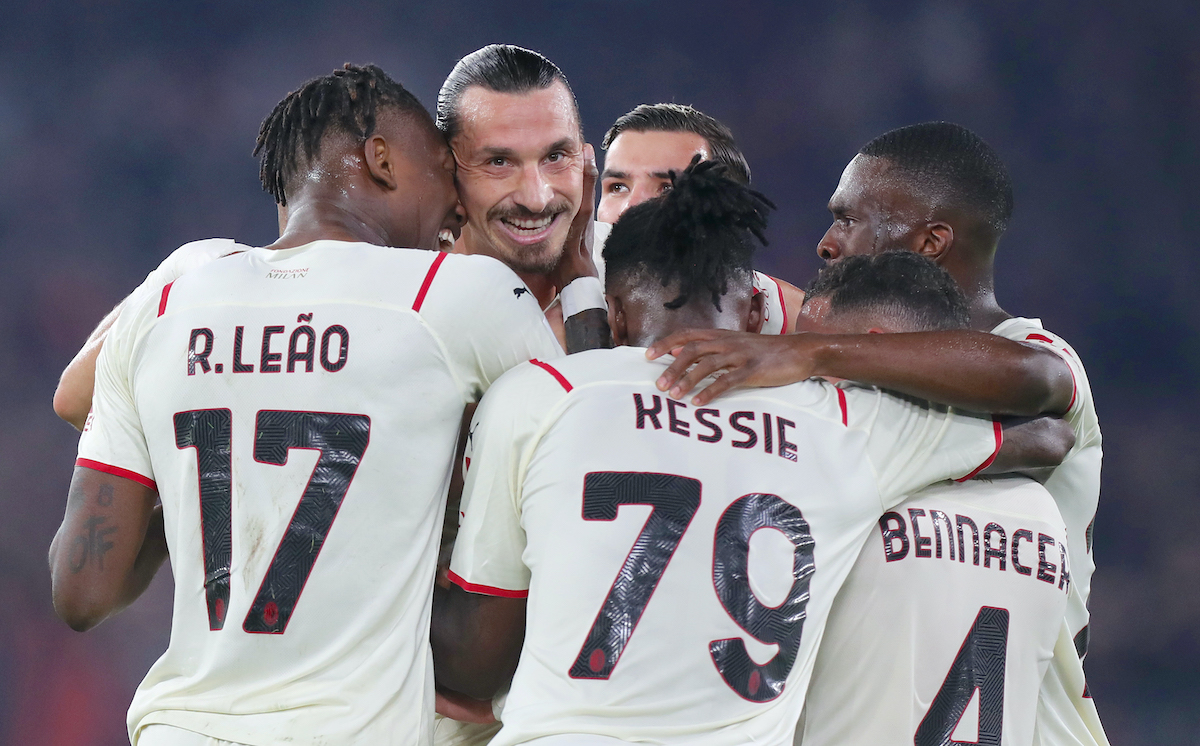 AC Milan made it ten wins from their opening eleven league games as they ran out 2-1 winners against Roma at the Stadio Olimpico on Sunday night.

The Rossoneri knew that the pressure was on after Napoli’s win against Salernitana to move three points clear again at the top, but the tone was set by Zlatan Ibrahimovic’s thunderous free-kick in the first half.

A second goal came from the penalty spot as Ibrahimovic was brought down and Franck Kessie showed all his composure to send Rui Patricio the wrong way from 12 yards.

The ending was made more dramatic when Theo Hernandez was sent off with 25 minutes to go after a second yellow card, but Milan navigated the remaining period well aside from a late consolation from El Shaarawy that made the final three minutes a tad more nervous. The win moves back level with Napoli on 31 points after 11 games ahead of next week’s derby.

Stefano Pioli made four changes to the starting line-up from the team that Torino in midweek with Theo Hernandez coming in at left-back, Simon Kjaer at centre-back, Ismael Bennacer starting in the double pivot and Zlatan Ibrahimovic up front.

Roma had the first opportunity of the game inside the opening three minutes as Vina got the better of his man down the left side and pulled a low ball back to Pellegrini just in front of the penalty spot though his first time effort was narrowly wide of the near post.

The Rossoneri then answered back with a chance of their own as an interchange between Ibrahimovic and Leao ended with a lovely lay-off to Kessie that the Ivorian dragged just wide of the far post.

Milan began to get the better of proceedings and a wonderful cross from Calabria found Leao who had run in behind, though the Portuguese winger waited to take the chance with his left foot and the awkward bounce denied a tap-in.

The Giallorossi could have taken a 14th-minute lead when Karsdorp found some space in behind Theo Hernandez and used his pace to get to the byline and pull a ball back into a dangerous area and the chance ended with Pellegrini shooting wide from the edge of the box after a ricochet.

Ibrahimovic was the latest to have an opportunity in what was a lively start after Krunic found him with a ball in behind, but his shot from the left side of the box was from a narrow angle and went over the bar.

It was Milan who took the lead in the 26th minute, and it was that man Ibrahimovic who scored against his favourite victims again. Leao won a free-kick on the edge of the box with some neat footwork and the Swede put his laces through the set piece, wrong-footing Rui Patricio and finding the bottom corner.

There was another huge chance for Milan ten minutes from the break as Leao surged into the box and looked to have found Ibrahimovic for a shot but as the striker fell over and Leao lined up a shot, a heroic block came in.

The former Lille man did have the ball in the net moments later after Ibra found him in behind with a flick-on and he knocked it over the keeper before heading in, but the offside flag went up for a very close call.

After a succession of dangerous corners from the home side it was Milan that had the last chance of the first half as Theo Hernandez struck a free-kick sweetly and drew a diving stop from Rui Patricio.

An early shot over the bar from Pellegrini seemed to spark Milan into life as Ibrahimovic scored with a beautiful finish across goal into the bottom corner however he was marginally offside and the flag was raised.

Then there was a huge call from Maresca as Ibrahimovic went down inside the box under a challenge from Ibanez and he consulted VAR before confirming his original decision. Kessie was the man who took on the responsibility and he sent Rui Patricio the wrong way to double the advantage.

He made yet another big call just inside the final 25 minutes as Theo Hernandez got his second yellow card as he appeared to slip to the ground and Pellegrini tumbled over him, meaning the full-back will now miss the derby next weekend.

The red card forced Pioli into a change as Fode Ballo-Toure came on at left-back with Saelemaekers making way.

As expected it was Roma who then began to turn the screw and a threatening free-kick was whipped in from the left corner of the box that sailed past everyone and out for a goal kick. A double change followed after as Alessio Romagnoli, Sandro Tonali and Tiemoue Bakayoko came on for Krunic, Bennacer and Leao.

The Giallorossi continued to turn the pressure screw and Kjaer made an absolutely fantastic intervention a few yards out to block a Zaniolo header at the far post.

Tatarusanu had to be on his toes more and more as the minutes wound down, and the Romanian made a strong save to deny Mancini’s shot from around 20 yards.

He could do nothing about El Shaarawy’s shot in the third minute of six added on at the end as the ex-Milan man fired into the top corner from near the penalty spot.

Zaniolo drew another fantastic save from Tatarusanu as he made a full stretch double-handed stop to thwart an effort heading for the bottom corner, and in the end Pioli’s men saw out the remaining minutes to secure a fantastic win and another huge three points.