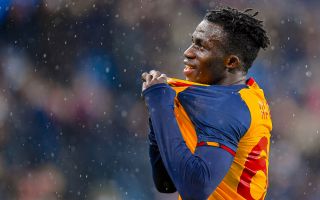 AC Milan were interested in signing young forward Felix Afena-Gyan before he ended up joining Roma, according to his agent.

After getting his first few competitive minutes in recent weeks, it was a dream come true for Afena-Gyan as he scored twice in Roma’s win over Andriy Shevchenko’s Genoa last night, earning himself a new pair of shoes as promised by manager Jose Mourinho.

The 18-year-old came off the bench in the 75th minute with the game at 0-0 and he inspired the Giallorossi to a 2-0 win by breaking the deadlock after slotting in a Henrikh Mkhitaryan feed in the 82nd minute and sealing the win with a wonderful curling shot from 25 yards.

The agent of the Ghanian – Oliver Arthur – has given an interview to TMW during which he reflected on his client’s match-winning brace in last night’s victory against Genoa and revealed an interesting market background.

“It goes beyond what we could have imagined, I am very happy and proud. I knew he had the right qualities but this exploit came really quickly, he has forged ahead,” he said.

How did the transfer to Roma come about?

“It was not a foregone conclusion, usually the Italian clubs do not use non-EU slots for such young players. Roma, especially the people Morgan De Sanctis and Simone Lo Schiavo, immediately showed great interest and the compliments for how professional they were, they immediately understood the value of the player.”

Were there other clubs too?

“Milan, for example, were interested. But, as I said before, in Italy it is rare for a club to use its slots non-EU slots for such young players.”

READ MORE: Juve’s attempt for Szczesny swap deal with Milan and what Maldini told them