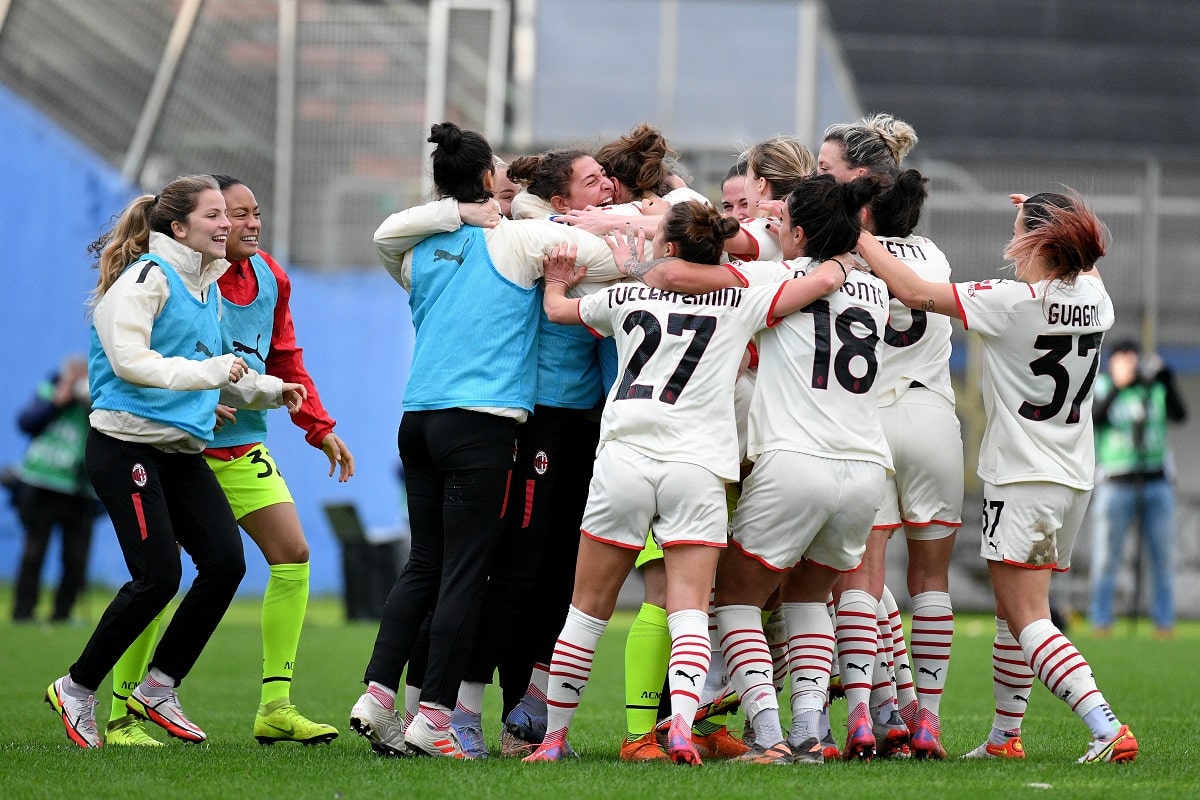 Despite all of the turbulence currently engulfing the AC Milan Women, the team managed to find some sunshine amid a tempestuous storm.

The team mustered up enough will to beat the heavily favoured AS Roma side by a score of 2-1. And with that victory, they will now play in the Supercoppa Femminile final. Here’s a recap of how it happened.

If you wanted a perfect, metaphorical example of the phrase ‘being pushed into the deep end’, then you would have found it with this match. The ones who were shoved into the ocean without floaties were the new kids, Alia Guagni and Martina Piemonte. The two players started for the Rossonere after signing for the team just a few days ago. Fortunately, they’re both big girls who put on their big girl pants and who did their part to help Milan in their battle against Roma.

The insertion of the newly signed players into the lineup wasn’t the only surprise of the day. Before this match, Nina Stapelfeldt and two other Milan players tested positive for COVID-19. This forced coach Maurizio Ganz to improvise and he did so by deploying the fullback Guagni as an attacker. Nonetheless, his hair-brained scheme somehow worked.

The first real chance of the game, however, fell to the Giallorosse. Benedetta Glionna found space and then forced Laura Giuliani into a save at her near post. In the ninth minute, AC Milan answered back as Camelia Caesar nearly fumbled Linda Tucceri Cimini’s corner into the net. Nine minutes later, Grimshaw ran through the middle and fired a shot on target. The scoring attempt was saved and the better option would have perhaps been to pass it to an open Guagni. In the 21st minute, Lindsey Thomas sent a through ball into the path of Martina Piemonte, who then fired the ball over the bar.

The Rossonere would eventually find their breakthrough though. As Roma struggled to move the ball around, Milan took advantage of this and in the 32nd minute, Bergamaschi set Thomas up for the tap-in. Then, about a minute later Valentina would head home the Rossonere’s second goal via a meticulous cross from Linda Tucceri Cimini.

Halftime came and the two teams entered the locker room for a brief respite. The Rossonere would then emerge from the tunnels and enter the second half with fire in their veins. The team carved out three successive chances between the 56th and 59th minute. Sadly, none of those chances were converted. The first opportunity of the half fell to Greta Adami, who nearly caught Caesar off guard with a long-range shot from distance. Then, Thomas and Piemonte worked in tandem to win a corner. However, nothing would come of it.

The biggest chance of the three fell to Guagni, who used her speed to break free from Roma’s backline and then forced Caesar into making a save. Eventually, Milan began to take their foot off the pedal and they gradually let Roma back into the game. After a long period of pressure, Roma scored in the 73rd minute through Claudia Ciccotti. A brilliant, through ball from Palama Lazaro started the sequence of events, and Ciccotti managed to slot it home. Milan’s Laura Giuliani was, unfortunately, caught off guard by this series of events.

The Rossonere needed to dig deep to withstand a final assault from the Giallorosse in the last quarter of an hour. Despite this, Milan did manage to create a few chances in extra time, as both Guagni and then Grimshaw had opportunities to extend Milan’s lead.

Neither of those chances were converted. In the end, it didn’t matter, as the ref would blow the final whistle, and Milan would emerge the victors of the match. They won the game by a score of 2-1 and will play in this Saturday’s final.

Valentina Bergamaschi was named the MVP of the match by the FIGC, and rightfully so. The Jolly not only scored a goal but assisted one as well.

And for that, Valentina deserves all the plaudits. 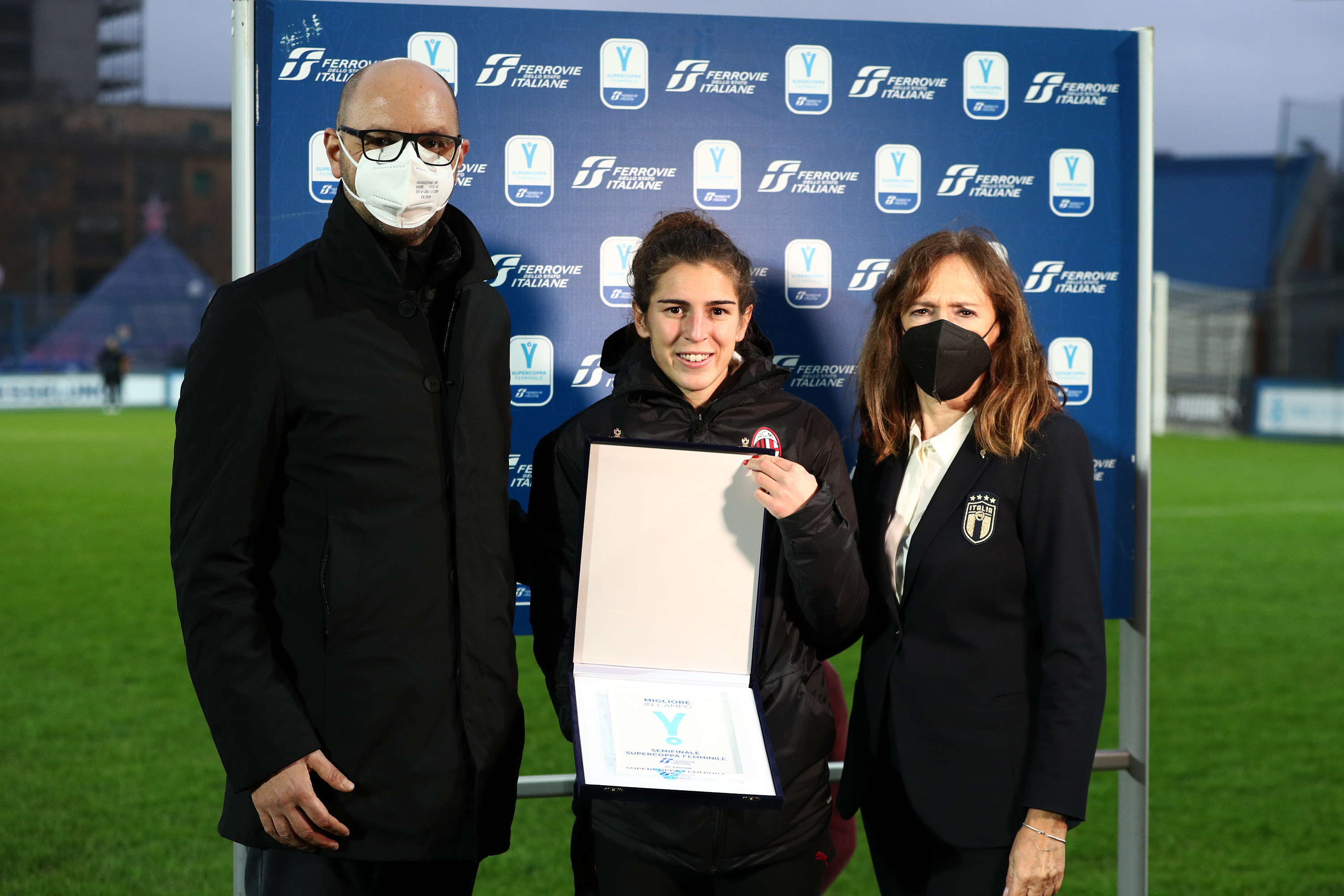 If there was one standout for this game, aside from Bergamaschi, it had to be Laia Codina. The defender was absolutely brilliant for Milan, as they made several crucial interventions for the team at key moments to keep them in the game.

The defender has developed a finely honed tactical nous, and they have done so at the tender age of 21. And the best part is, the player has yet to enter their prime. Things can only get better from here.

Though Roma had the majority of possession, Milan managed to outshoot their opponents by a total of seventeen shots to twelve. Five of Milan’s shots were on target.

The Rossonere’s strategy was to sit back, soak up pressure, and hit the Giallorosse on the counterattack. And in the end, it paid off for them in a big way. 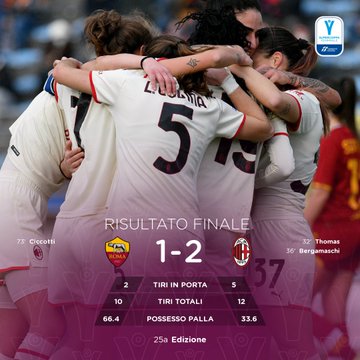 The AC Milan Women will play Juventus in the Supercoppa Femminile final. The match will take place on Saturday, January 8th. The kickoff time will be at 14:30 CET.

Afterwards, they’ll resume their league campaign by facing off against Hellas Verona. That game will take place on Saturday, January 15th. The kickoff time then will also be at 14:30 CET.

READ MORE: Milan’s record this season with youngsters Gabbia and Kalulu on the pitch