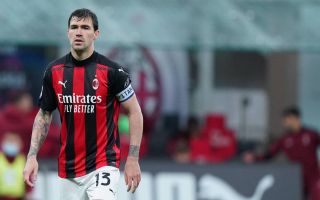 AC Milan defender Alessio Romagnoli has expressed his desire to play and dodged a question regarding his future at the club.

Milan returned to winning ways at San Siro on Saturday night, beating relegation battlers Benevento 2-0 to move temporarily second again. An early goal from Hakan Calhanoglu certainly helped to ease the nerves for Milan, and the lead was doubled on the hour mark though as Theo Hernandez seized a rebound chance.

A wasteful Benevento couldn’t get a goal to make matters interesting in the closing stages as Milan put pressure on Atalanta, Juventus and Napoli around them, moving second for the time being. Pioli made four changes to his starting XI from the team that lost 3-0 to Lazio on Monday night, with Romagnoli one of them, helping to keep a clean sheet alongside Tomori.

Romagnoli was interviewed by DAZN at the end of the game against Benevento, with his comments relayed by MilanNews and translated below.

On the difficult week: “A win was essential. In Rome we did not do well and we knew it. Now we have 4 matches and we have to do more and more.”

On returning to the line-up: “I would always like to play, then the Coach makes the choices. As long as I’m here I’m ready to give my all. The important thing is that those who play give their soul.”

On the feeling within the squad: “We are fine, we have spent a period like this, we have to isolate ourselves and think only of the pitch.”

On the fundamental upcoming matches: “We have to work well and present ourselves in the best possible way.”

On his future and if it depends on the Champions League: “I have another year on my contract, these are questions for the managers and not for me.”