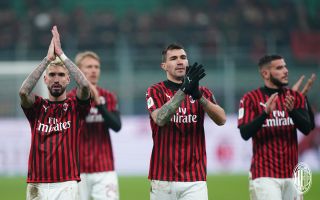 Romagnoli highlights importance of Torino win; assures they won’t get carried away

AC Milan secured their spot in the Coppa Italia finals earlier this evening, although the clash against Torino required extra-time before the Rossoneri could seal the deal. Nevertheless, a win is a win.

After the final whistle, captain Alessio Romagnoli was interviewed by Rai Sport (via MilanNews.it), sharing his thoughts on the game. As he described it, it’s a very important win for the team, given how the game panned out.

“It’s a very important result, also for how it arrived. We seemed to be in control of the game, then we went down but in the end, we won.

“We are well physically. When you win, then you have a lot more energy. We must continue to work and continue in the positive trend, starting with the match with Verona,” he began.

The Rossoneri will now face Juventus in the semi-finals, which certainly will be a tough two-legged encounter. However, as there are many league games in between, Romagnoli didn’t want to put too much focus on the game.

“Juventus? Before facing them we have two games, we are only thinking about one game at a time,” he concluded.

Stefano Pioli’s men have now won five consecutive games in all competitions. On Sunday afternoon, they will take on Hellas Verona at the San Siro, hoping to make it six in a row. Certainly, it looks like they are on the right path.